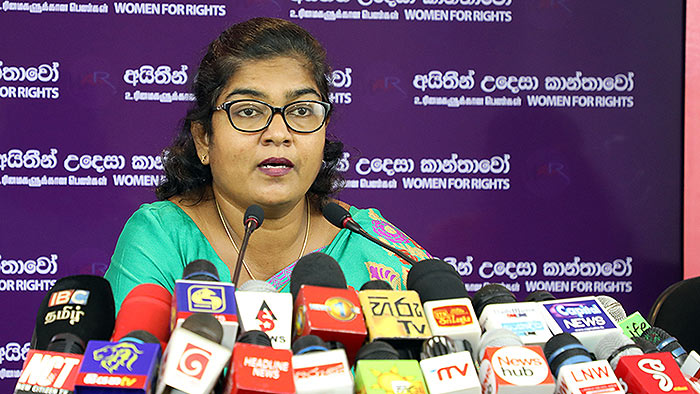 JVP women’s wing, Women for Rights, yesterday (April 10) said that if the government continued to cling on to power its leaders should be ready to face the fate suffered by despot rulers such as Ferdinand Marcos of the Philippines and Muammar Gaddafi of Libya.

“We hope that the Rajapaksa family would understand the political reality in the country and public opinion against them. They should step down with respect rather than waiting till people come to their homes to drag them out. They should not wait till they suffer the same fate of Marcos and Gaddafi,” President of the WFR Sarojini Savithri Paulraj, said, addressing a press conference held at the JVP Headquarters yesterday.

“Economists have warned that the economic situation will change for the worse in the coming weeks. There is warning of an imminent food shortage. Neither the President, nor the bunch of thieves with him, can find solutions to the crises. They have proven their incapability. The crises started with the fertiliser shortage and that evolved to shortages of fuel, milk powder, gas and other essential items. There are no band-aid solutions for the crises, except the resignation of the President and the government, immediately, so that a team of capable persons could devise a mechanism to save the country from its present plight.

“First action for any solution is the resignation of the President. Thereafter, people will give time for anyone else but not for this President, nor his henchmen, or family members. The President and his family members are not only incapable of finding solutions but also preventing others from doing so.”