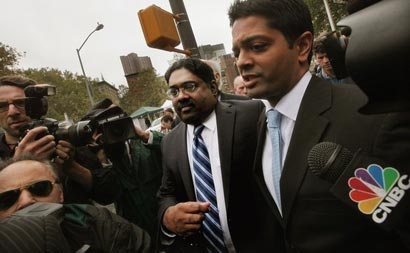 Raj Rajaratnam, a self-made hedge fund tycoon convicted in the biggest Wall Street trading scandal in a generation, was ordered on Thursday to serve 11 years in prison, one of the longest sentences on record in an insider-trading case but less than prosecutors had sought.

Prosecutors had asked U.S. District Judge Richard Holwell in Manhattan to impose a sentence of at least 19-1/2 years on the Galleon Group founder,

Defense lawyers had argued that Rajaratnam deserved a much shorter prison term, citing unspecified health problems and arguing that the government was pushing for a punishment more appropriate to a violent criminal.

Prosecutors have called Rajaratnam, 54, the “modern face” of insider trading, putting him in a dubious pantheon of Wall Street power players such as takeover specialist Ivan Boesky and junk bond financier Michael Milken, principal figures in a mid-1980s insider-trading case. Both men served about two years in prison. Rajaratnam’s legal battle will go on, as he appeals his conviction on 14 criminal charges by a New York jury in May. The appeal targets the legality of the FBI wiretaps used to gain evidence that he improperly pumped corporate insiders for confidential data. Jurors heard dozens of the wiretap recordings during the two-month trial.