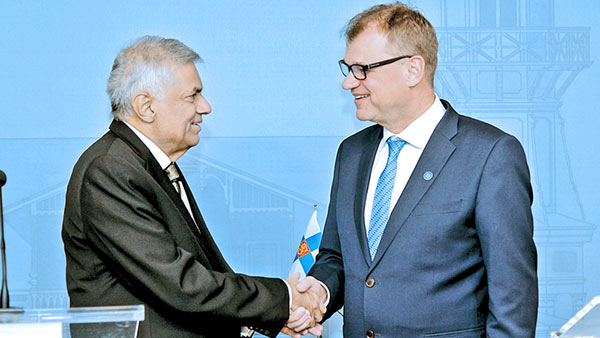 Prime Minister Ranil Wickremesinghe and Finland’s Prime Minister Juha Sipilä agreed that a concrete pilot project would be initiated in the field of wave energy in Sri Lanka.

At a meeting held at the residence of the Prime Minister of Finland in Helsinki, Finland yesterday, the Prime Ministers discussed about their common commitment to strengthening ties between the two countries in the field of energy with a forward looking and a business- minded approach.

The Prime Ministers agreed that the national instruments facilitating the utility scale deployment of near shore wave energy power plants would be utilised as part of the implementation of Sri Lanka’s energy plan to foster the use of the country’s vast coastline and immense wave energy resource.

Prime Minister Wickremesinghe noted that they had discussions about creating connections with educational institutes in Finland as they have one of the best education systems.

“It will be useful to remodel our education system as well, especially with regard to the implementation of mandatory education for 13 years,”he said.

Finnish Prime Minister Juha Sipilä assured that Finland can support Sri Lanka in its effort to acquire suitable technology from Finland to meet its renewable energy production goals and increasing demand and added that they would provide experts as well as grant loans with concessionary interest rates to carry out the projects.

Responding to a question raised by a Journalist whether these projects could be successfully implemented in Sri Lanka, Prime Minister Wickramasinghe said that Sri Lanka has higher potential for the development of energy sources and added that there are possible opportunities for collaboration between the two countries in a sustainable, innovative and profitable way.