Opposition leader and the leader of the United National Party (UNP) Ranil Wickramasinghe called on President Mahinda Rajapaksa at Temple Trees this morning on 14 May, a Senior Spokesperson from the President’s Media Unit said.

A reliable source stated that the special meeting was held on obtaining the oppositions’ representation for the Parliamentary Select Committee (PSC). It is also learnt that the discussion focused on the PSC on reconciliation and the implementation of some of the LLRC recommendations. At the meeting the Opposition leader has handed over the  ‘UNP strategy’ a recommended formula to the government for the creation of a favourable political climate for the Tamil National Alliance (TNA) to join the proposed Parliamentary Select Committee, informed source further said.

Pictures are seen here two leaders, ministers and the UNP representatives in conversation at Temple Trees. 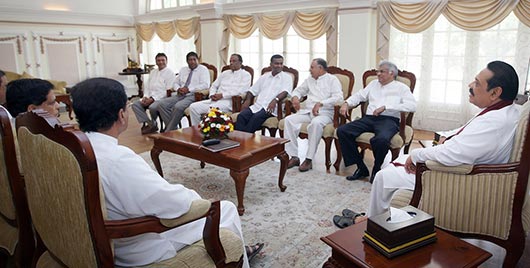