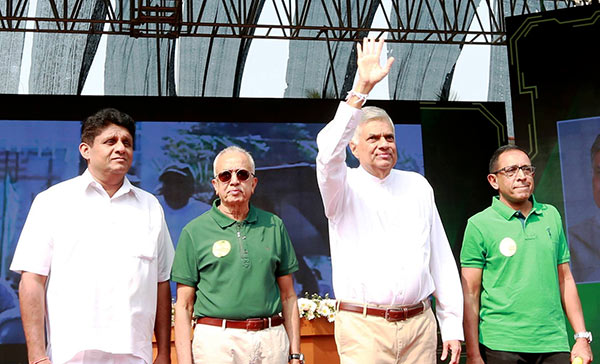 Prime Minister Ranil Wickremesinghe yesterday called for the summoning of Parliament two-weeks ahead of schedule to debate the Bond Commission report which has called for a forensic audit of the Central Bank.

Addressing the 71st Convention of his United National Party, Premier Wickremesinghe said he had already asked Speaker Karu Jayasuriya to examine the reconvening of the Legislature without waiting for its first scheduled session for 2018 later this month.

The Prime Minister said the government was keen to go ahead with a debate, which would be the third on the bond issue which had been examined by a Parliamentary Committee as well as a Presidential Commission.

He said Joint Opposition MP Dinesh Gunawardena had asked him if the Presidential Commission report could be discussed in Parliament and he had readily agreed.

“Dinesh Gunawardena asked if we could debate the Bond Commission report to which I have said we should. I’ve requested the Speaker to hold a debate soon,” Wickremesinghe said amid loud applause at Campbell Park on Sunday.

“This is the third time we will be holding a debate on the same issue. We have nothing to hide.”

He said the Presidential Commission has recommended a probe into transactions since 2008.

“A sum of Rs.4,000 billion has been defrauded without the approval of the Monetary Board of the Central Bank, while Mahinda Rajapaksa made away with billions that could not be reimbursed.”

The Prime Minister had asked Finance Minister Mangala Samaraweera to secure important confidential documents, while Minister Kabir Hashim has been instructed to ensure that the paper trail at the National Savings Bank and the Insurance Corporation of Sri Lanka was kept securely.

The Presidential Commission which submitted its report to President Maithripala Sirisena last month noted that possibly the biggest fraud was perpetrated on the Employees Provident Fund administered by the Central Bank of Sri Lanka between 2008 and 2014 during the tenure of President Rajapaksa.

“I didn’t mince my words, these are the recommendations of the Commission,” he said. “There are 19 court cases, 40 Police probes and 24 other matters relating to the Presidential Elections (of 2015) to which we have set up special units. We will bring these culprits to book, there is no question about it.”

There had been wide spread allegations that the former regime used State funds for Rajapaksa’s failed re-election bid three years ago today.

The Premier reiterated the UNP’s mandate to work at the grassroots level. He said the UNP-led coalition government had achieved many feats, including the re-payment of a trillion dollar debt despite the economy being in dire straits.

He called on the general public who were gathered in large numbers on Sunday to exercise their franchise for a party that has salvaged the country.

“I urge you to vote for women, empower them to lead you. It is the UNP that called for a greater participation of women and it is apparent by the turnout today,” he said.

He made a reference to Rosy Senanayake who is the Colombo Mayoral candidate. She could be the first female Mayor of Colombo.

The UNP was founded on September 6, 1946 under the leadership of D.S. Senanayake, who became the country’s first Prime Minister. During the past 70 years, the party has represented the Government and the Opposition.