Record on par with developed countries: Unemployment down to 5.4 percent 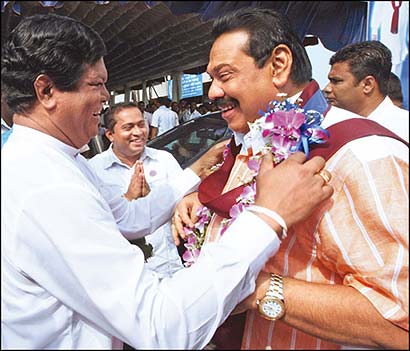 Despite the world economic recession, the Government was able to bring down the unemployment rate to 5.4 percent by the last quarter of 2009, Marketing Development, Co-operatives and Consumer Services Minister Bandula Gunawardena said. The Minister was quoting from a report issued by the Central Bank of Sri Lanka at a media briefing at the Government Information Department yesterday.

The Government has opened several employment generating avenues. Accordingly more employment opportunities will be generated in naval, aviation, power, knowledge and trade and marketing sectors. The Government has drawn special attention on bringing down the unemployment rate of qualified and educated persons which is around 10 percent, Minister Gunawardena noted. Minister Gunawardena totally rejected Opposition allegations that the unemployment ratio in the country is over 20 percent.

The lowest ever unemployment ratio (5.2 percent) since independence was reported in 2008 . However the unemployment ratio had gradually gone up to 6.3 percent by the second quarter of 2009 as a result of the world economic recession which affected the global economy as a whole.

“Considering this situation, the Government took timely and appropriate action to reduce the unemployment rate while generating new employment opportunities.

“The Government was able to bring down the unemployment rate to 5.8 percent by the third quarter in 2009 from 6.3 percent in the second quarter of 2009”, he said.

Contrary to the UNP government’s policy, the Government absorbed more than 300,000 young blood to the Government service including 42,000 new graduates during the past few years into various fields such as teaching, nursing, clerical services, banking, Security Forces.