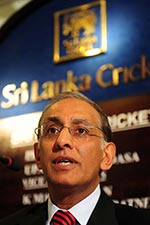 Haroon Lorgat, the former ICC Chief Executive, has recommended less government interference in team selection, in addition to 23 other recommendations to Sri Lanka Cricket, in his review of the sport in the country. Lorgat was appointed short-term special advisor to the SLC in July, and was tasked with performing a wide-ranging review of governance, cricket structure, administration and finances, of which his ten-page report is the result.

Among the issues Lorgat raises in his report is the poor reputation of the SLC, its weak financial position, lack of professional administration, non-existent organisational culture and a lack of transparency. He also recommends a restructuring of domestic cricket, and recruiting the help of former greats in the development of cricketers.

After Lorgat had presented his report, SLC Secretary Nishantha Ranatunga said it was now the job of the stakeholders – a wide ranging group including clubs, media, players and the SLC themselves – to implement Lorgat’s recommendations.

“From my personal point of view, I feel all these recommendations need to be addressed by the stakeholders,” Ranatunga said. “The improvements need to sit along with the stakeholders, and they need to come up with strategies to overcome it.

“The other option is to get an independent committee to come and look at this and come up with a solution.”

The report’s recommendations on reducing government interference focus on a law that requires international team selections to be approved by the Sports Minister, who also appoints a nominee to the selection panel. On the basis of responses from interviewees, the report inferred that the Minister appoints the entire selection panel. The report recommends SLC work towards an amendment to the law that might see a selection process free of government interference. It also suggests the SLC ensure independence for the selection committee, and consider having full time selectors.

Ranatunga said the board had already approached the Sports Minister about amending the Sports Law. “We have discussed this with the honourable Minister, and he was very positive about changing certain clauses in the Sports Law to accommodate this report. He was positive about the changes that are needed for the development of the game.”

The report further states that the administration lacks clear vision, is poorly managed and notes a lack of adequate communication between various arms of SLC. It recommends a reduction in the number of Executive Committee members, which presently stands at 22, and suggests appointment of a CEO who is “properly empowered to lead a professional administration that is held accountable by the board” and is the face of the organisation.

Lorgat has also advised a major restructuring of domestic cricket aimed at decentralising first-class and List A cricket in Sri Lanka from Colombo, and believes dialogue with the existing clubs are vital to that end. The report also suggests former players whose relationship with SLC has soured should be utilised in the development of cricketing talent, after tensions between the parties have been cleared. Lorgat makes mention of former captain Arjuna Ranatunga in his report, who has been an ardent critic of SLC in the past two years, and states he was unable to contact Ranatunga during his research.

“Unfortunately Mr. Ranatunga was busy, he was traveling and was in the UK on occasions. I am still trying even today to get in touch with him.”

Lorgat interviewed 42 stakeholders during his review, including current and former players, SLC staff, board members, club representatives and media.