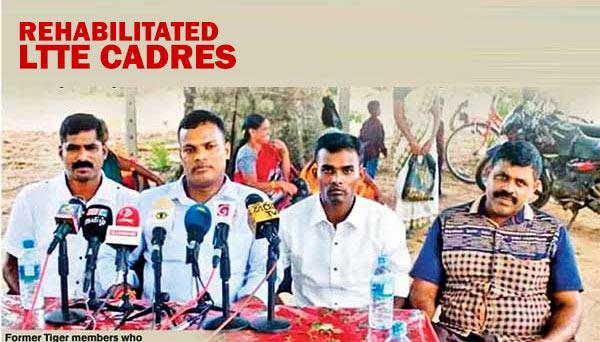 A group of rehabilitated LTTE cadres have launched a political party with the aim of winning their rights.

Speaking to the media in Sampur on Friday (3) the leaders of the new party said they had registered the party ‘Rehabilitated Tamil Liberation Tiger Party’.

A group of more than thirty former Tigers were present at this media briefing held near the Kali Kovil at Sampur in Trincomalee.

Chairman of the new party, Kandasamy Inbarasa, said that this party was launched with a membership of 12,000 rehabilitated Tamil Tiger cadres.

He said they launched this party because those who were rehabilitated had not received any assistance as yet. At the same time, he said that a large number of members were living with physical injuries and some were still in prison. That is why they were joining the political stream.

He said that through this party they will attempt to obtain their rights. “The current government had helped the rehabilitated former Tigers to a great extent.

However, the Tamil National Alliance does not talk about us. We did not begin this political campaign against them. We believed in them and now we have been deceived,” he said.