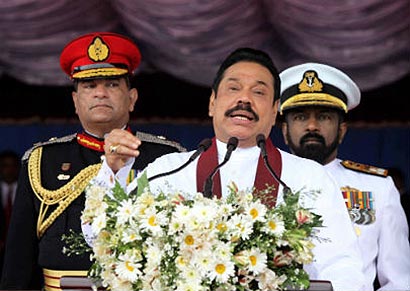 President Mahinda Rajapaksa reminded the world of the provisions in the United Nations Charter of calling on all nations to refrain from the threat or use of force against the territorial integrity or political independence of any state in their international relations.

He said that nothing contained in the present Charter shall authroize the UN to intervene in matters which are essentially within the domestic jurisdiction of any state or shall require the Members to submit such matters to settlement under the present Charter.

President Rajapaksa said this while addressing the nation on the 65th Independence anniversary celebrations held at the Eastern post city of Trincomalee today.

President stressed that Sri Lanka is a country that always respects the Charter of the UN and that all member countries, whether powerful or weak, should respect its Charter.

Urging the importance of unity among all people he said that as much as racism, religious differences too can be a cause for the destruction of a country.

Those who try to provoke religious rivalry in the country do not serve their religion, but serve the interests of separatism in the country. We cannot leave room for what could not be achieved through terrorism to be gained by this means, he said.

President also said not only the government but the opposition too has the responsibility to safeguard the freedom we have won.

Protecting the country and building reconciliation is not support extended to the government or the opposition but doing one’s duty by the land of one’s birth, he said.

Here is the full text of the speech:

We celebrate this 65th anniversary of Independence with great freedom and the immense pride derived from it. I offer my respectful salute to all who sacrificed their lives and shed blood and sweat for Sri Lanka’s freedom and independence.

You are aware that the city of Trincomalee that we are gathered in today is an area with a very important history. For thousands of years Sri Lanka was important to the world because of the Trincomalee Harbour located here. In the past this port was called the Port of Gokanna-titta.

As stated in our Chronicles it was in this area that the two merchant brothers – Thapassu and Bhalluka – set ashore with the hair relics of the Buddha. During the Kandyan period, when we had been deprived of higher ordination of the Sangha, the monks who brought higher ordination from the ancient land of Siam, also arrived at Trincomalee. When we were important in the world because of this port, the Dutch arrived and established a fort at Kottiyar and captured this area. The evidence of history is that to secure power in Asia control over this port of Trincomalee should be obtained.

That is why even after the country received independence in 1948 the British maintained their naval camps in this area. The camps of foreign naval forces that were in the country since 1795 were removed in 1957.

Ven. Members of the Sangha and respected clergy,

You will recall what the LTTE Tigers subsequently did to gain control of this port and city that had become a nerve centre in the Indian Ocean. The Buddha statue at Trincomalee was protected with barbed wire fencing around it. There was no peace or freedom even for the sacred statue. On the day when the first provincial council elections were held after this area was liberated, the terrorists sunk a ship that was anchored in this harbor.

We have arrived in Trincomalee today having broken all those shackles of slavery. Therefore, by holding our Independence Day celebrations in this city important to the world for thousands of years, we show the world the importance we attach to both world peace, freedom and reconciliation. Nearly four years have gone since Sri Lanka became the only country in the world to have totally eradicated terrorism. However, throughout this entire period we have had to face continued challenges to protect the freedom and independence of our motherland.

For this very reason we have now come to a very strong situation. Similarly, facing up to these challenges have increased our desire to be committed to our freedom.

Our interest in gaining economic strength has similarly increased.

Sri Lanka’s foreign policy is that of non-alignment. It is necessary for us to build a new era in foreign affairs based on this policy. This is essential for the freedom of Sri Lanka today. In addition to our traditional relations we have established new links with Asian, African, Arab and Latin American countries.

We respond to the publicity against Sri Lanka carried out abroad by inviting foreign countries to come to Sri Lanka. We have seen that the best answer to false publicity and propaganda carried out in foreign countries is development and reconciliation in Sri Lanka. Do not believe something just because it is said, because you have read reports, critics have said it or the media has published it. We tell the people of the world – Come! Come Over and See for yourselves!

I shall now quote it,

1. The Organization is based on the Principle of the sovereign equality of all its Members.

2. All Members shall refrain in their international relations from the threat or use of force against the territorial integrity or political independence of any state, or any other manner inconsistent with the Purposes of the United Nations.

3. Nothing contained in the present Charter shall authorize the United Nations to intervene in matters which are essentially within the domestic jurisdiction of any state or shall require the Members to submit such matters to settlement under the present Charter.

We are a country that has always respected the Charter of the United Nations. We strongly hold the position that whether powerful or weak, any country in the United Nations Organization should respect its Charter.

It is necessary to state on this occasion that as much as racism, religious differences too can be a cause for the destruction of a country. If anyone is trying to build religious rivalry in Sri Lanka again, they do not serve their religion, but serve the interests of separatism in the country. We cannot leave room for what could not be achieved through terrorism to be gained by this.

Today in Colombo and the South the Sinhalese, Tamils and Muslim people live together. In the East the Sinhalese, Tamil and Muslim people live together. The best example of this is Trincomalee. In Ampara too all three communities live in harmony. In building of the Velgama Raja Maha Viharaya here in Trincomalee, at a certain era the Tamil Hindus also contributed as much as the Sinhala Buddhists. That is not all, in Kandy where the Sacred Tooth Relic of the Buddha is enshrined; the land to build the Meera Makkam Mosque was donated from land of the Asgiriya Temple.

Speaking in Tamil too President Rajapaksa gave the example of people of Sinhala, Tamil and Muslim communities living together in harmony in Colombo and the South with Trincomalee being a very good example for this. He reminded that the building of the Welgama Raja Maha Viharaya in Trincomalee was through the joint efforts of Sinhala Buddhists and Tamil Hindus and that land for the Meera Makkam Mosque in Kandy was given from a Buddhist temple.

Speaking further in Tamil he said: My friends in the Sinhala , Tamil and Muslim communities all of you have a very high culture. I would urge you to trust your neighbour and not leave the country as done by the Diaspora that has left the country and live aboard.

If freedom is a heavenly state, it is not a state one can fully achieve. There was a time when you went past the road blocks in fear of death. When you trod in fear past the roadblocks you did not see the potholes. You did not have the time to think of cleanliness of the city or new road signs. But when the fear of death and the roadblocks are no more, you notice the potholes on those roads. What is next needed is a concrete road. Once concrete roads are given to the entire country and the roads are properly carpeted one notices the absence of modern signboards. When these are completed we seek roads with more lanes for traffic.

The expectations in a free country are also like this. The more freedom is obtained; the people expect a more advanced life.

If you count the decades from 1948 to 58, and onwards, there is no doubt that the decade of freedom from 2008 to 2018 will become the greatest era in our country. It is in this decade that we gave full meaning and content to the statement by Mr. D. S. Senanayake at the time of independence that “freedom was obtained to reduce sorrow and increased happiness.”

We are a nation that has suffered immensely for freedom. All political parties in this country should understand this. It is not only the Government, but the Opposition too has the responsibility to safeguard this freedom we have won. Protecting the country and building reconciliation is not support extended to the Government or the Opposition. It is support given to the country. It is doing one’s duty by the land of one’s birth.

It is necessary that I place before the world a reference in Buddhist teaching about the value of freedom. In preaching to a young Brahmana named Ambatta, the Buddha related the example of Gomariththa to show the importance of being able to live freely even under the most trying conditions.

The bird refer to Kata Kirilli, commonly known in villages as Gomariththa (common wagtail) is found in paddy fields that builds its nets under the mud raised by ploughing the filed. The Kata Kirilli too should have the freedom to live within its nest the way it wishes. The Sri Lankan people are also entitled to this freedom. Therefore the people of my country should have the right to live freely.

Wish you a bright and prosperous future!