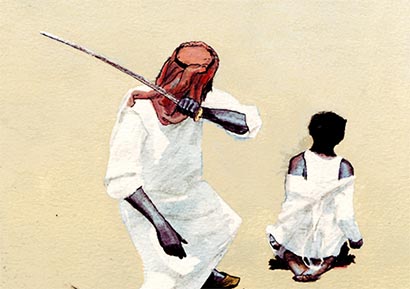 Rizana Nafeek a Sri Lankan national from Muttur was beheaded according to Saudi Arabian law on 9 January 2013 having been found guilty of killing a 4 month baby while serving as a domestic in Saudi Arabia in 2005. The appeals for her release were many – from both local and international. Yet, it is the Sri Lankan Foreign Ministry and its Mission in Saudi Arabia that must be held accountable and an inquiry must take place to review where the mistakes took place and how best these can be addressed to avoid such incidents from taking place in the future.

Where did Rizana go wrong?

For starters Rizana came from a poor Muslim family. She wanted to chip in to do her bit for the family. Did that really necessitate to forge documents and travel abroad? Doctoring public documents is a criminal offence. That she altered her age to read as 21 when she was only 17 at the time of departure cannot constitute blame on the Saudi Arabian Government. Human Rights organizations can object in view of her real age but Saudi Government cannot be faulted because her passport gave her age as 21. Rizana, her parents and the Muslim agent who doctored her documents are to blame.

Moreover, she did not go through the Sri Lanka Foreign Employment Bureau. Could she not have begun helping her family by becoming employed as a domestic in a home in Colombo? Are domestics now not paid more than Rs.10,000 exclusive of food, lodging and clothing given? Moreover, one is able to at least see one’s children, attend a funeral or even run home for any emergency – one cannot do any of the kind when living as a domestic overseas!

Rizana was just one among 1.8m Sri Lankans working overseas – of this 45% are females. She was not the first to be beheaded and is unlikely to be the last also. If we do not want to see such incidents take place – we need to seriously address this issue and problems always have solutions so long as there is passion to solve it.

The stories of Sri Lanka’s imported women being battered, raped, abused, tortured, humiliated and even put to death has never reduced the number of women desiring to go abroad or made officials to reconsider other avenues of generating income as the social implications of a mother’s departure overseas has resulted in too many shocking news affecting Sri Lanka. Why do we knowingly want to send our women to be physically and mentally abused and treated as slaves? There is little point in blaming the other country because we are knowingly continuing to send women to be treated this way. The welfare of these women should matter more than the billions of remittances that these housemaids send home. We had plenty of time as a country since open economy to create skilled workers for overseas assignments rather than depend on labor remittances and have to deal with women who return home in coffins or without arms and limbs and then to deal with children being raped by their fathers.

Be that as it may the crime committed by Rizana was in 2005. We are all well aware of the Saudi Sharia Laws – we know how rigid they are and we know the consequences and how infidels (non-Muslims) are treated according to Sharia laws. Therefore, Saudi laws remain internal and nothing that Saudi will agree to change and nothing that can be changed. Having said that we are also aware that the killing of a baby constituted a crime categorized under Qisas: Eye-for-an-eye retaliatory punishments – the family of the baby could choose between demanding death or granting clemency in return for diyya or blood money by the perpetrator. The family had however refused blood money. However, there are plenty of cases of blood money being accepted.

Now, we come to the question of how many trips have the foreign minister and other officials being making since 2005 for Rizana’s release spending millions and not one of them cared to visit the parents of the “murdered” child in whose sole hands laid the decision of whether Rizana could live or die?

When it was well aware that ONLY the parents of the child could reverse the decision why did the Sri Lankan Foreign Ministry not explore this avenue further?

When we have a mission in Saudi Arabia well aware of how Sharia laws take place and the likelihoods of punishment why did not a single official have the brainwave to meet the parents and do a little PR on them and explain the poverty of Rizana’s family – certainly not to have told the mother that according to Sharia she should be breast feeding her baby and not giving the bottle! A visit or two to the home of the baby may have at least helped far more than the tamasha’s, statements and trips which have been of little use and another burden to the tax payer. Did it need to be given executive orders for foreign ministry officials to think of these simple tactics they could have adopted IF they were serious about doing something to get Rizana released.

Then we move on to the family of Rizana. She left to go overseas to change the economic status quo of her family living in a hut. That was in 2005. In 2013 as media hurried to interview the grieving parents – they remain in the same hut. Rizana’s case hit global news as far back as in 2007. When mosques are coming up all over Sri Lanka like mushrooms, when money is thrown to somehow push for Sharia laws to be implemented in Sri Lanka, when rigid extremism of Islam is appearing to signal danger signs for the country – could they not hand a few lakhs to make a home for these people? Why did fellow Muslims fail to look after their own? Similarly when all took to the streets simply because of a film that no one had seen was said to insult Islam… why did they not protest against Rizana’s beheading… a lot of hypocrisies all round.

However, coming down to the Foreign Ministry – it behoved this external affairs line Ministry to have handled the situation far better than mere talk which has become the hallmark of its role. It has left the Saudi’s angered by the negative media coverage and for all we know the Ministry may end up compromising Sri Lanka to make up for their gaffes. We were surprised at the quick reaction by Sri Lanka to the execution by recalling the Sri Lankan envoy in Saudi but it didn’t take 2 days to be told that a new envoy is being sent – are we to laugh or cry!

It is welcome to have academics who can speak intellectually and quote history etc.. but what good is that if there is no action, if there is no change and if there are no significant results for the country. It is time to seriously revamp the Sri Lankan Foreign Affairs – the root of all the present ills the country faced did lead to its head!