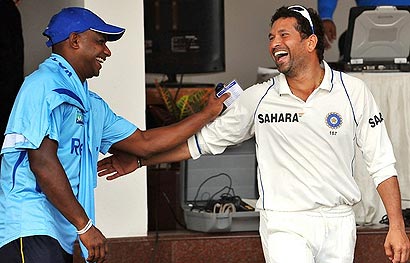 Sachin Tendulkar is playing his 444th one-day international, reaching another milestone in a career where he holds nearly every major record with the bat. Tendulkar, 37, equaled Sri Lanka’s Sanath Jayasuriya for the number of ODI appearances. Tendulkar reached the mark in the second ODI against South Africa on Saturday and will likely break the record in the third game on Tuesday.

Tendulkar already holds records for the most Test appearances (177), the most Test centuries (51) and the most Test runs. In ODI cricket, Tendulkar has 17,000 runs — over 4,000 more than Jayasuriya in second — and has hit 17 more ODI centuries than his nearest rival, Ricky Ponting of Australia – 46 vs. 29. Tendulkar is also the only player to make 200 in a 50-over international.