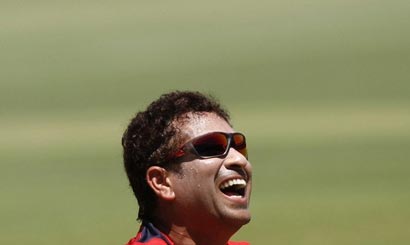 India’s cricket star Sachin Tendulkar has given himself a new look by colouring his hair brown.

Tendulkar’s brown locks were on display during India’s practice session at a stadium in Gujarat’s Ahmedabad city.

Tendulkar, who has been often described as the world’s best batsman, has not commented on what prompted the makeover ahead of a World Cup semi-final game.

He is just one century short of becoming the first cricketer to score 100 international hundreds.

Tendulkar, 37, has now joined a group of international cricketers who have coloured their hair.

Zaheer Khan, India’s most successful bowler in World Cup with 15 wickets, has a strip of blond hair.

With over 30,000 international runs in nearly 630 games, Tendulkar is India’s most popular cricketer with fans often describing him as “God”.