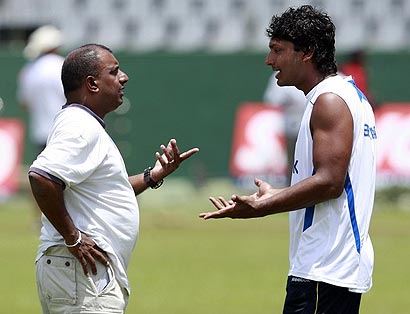 Former Sri Lankan batsman and Chief Selector Aravinda de Silva lashed out at the team’s inconsistent batting, particularly the middle-order failure, saying that the co-hosts need to perform several notches up if they want to beat England in the quarterfinal on Saturday.

The middle order, comprising Thilan Samaraweera, Chamara Silva and Chamara Kapugedera, has struggled to score runs and thus Sri Lanka have not been able to capitalise during the slog overs.

“Sri Lanka’s main concern so far in the tournament has been their inconsistency in the batting department,” said 1996 World Cup winner, adding that the middle order has not yet performed upto expectations.

He said “England are comfortable playing quality spinners, have the batsmen to make big scores and potential to upset any side on their day”.

He criticised the performance of Sri Lanka’s middle order batsmen specifically in their last group match against New Zealand. In that match, skipper Kumar Sangakkara and vice captain Mahela Jayawardene raised a century partnership but the team lost their way after the dismissal of the experienced duo. He also said that toss will be a crucial factor during the Sri Lanka-England tie with the dew playing a major role, the Indian Express reports.