President at Norochcholai: People rejected those who betrayed country 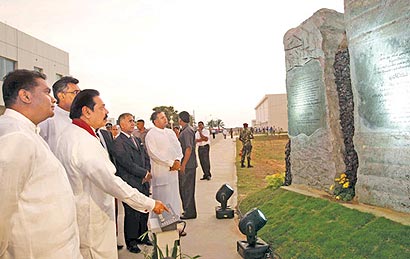 The people do not want to see those who betrayed the country in power.

“The resounding mandate given by the People to the Government at all elections since 2005 shows that they do not want to see treacherous elements in power,” said President Mahinda Rajapaksa.

The President was speaking at the opening of the first phase of the Lak Vijaya coal power plant in Norochcholai yesterday.

The President said that provision of electricity to the rural villages would no longer be an election pledge nor a slogan as the Government will complete providing electricity to all households in the country within the next two years.

The President added that 87 percent of all house holds in the country are supplied with electricity and it would be increased to 100 per cent within two years.

The first phase of Lak Vijaya Power plant generates 300 MW of electricity to the National Grid.

The project was funded by the Chinese Government. Construction work was carried by a Chinese company.

President Rajapaksa said that the Government is in the process of providing infrastructure facilities to the rural areas.

The President noted that those who stood in the Government’s path to liberate the country from the clutches of terrorism have raised their ugly heads again to deter the country’s development march.

President Rajapaksa added that they have launched protests demanding the ban of GSP+ facility on Sri Lanka.

The President added these elements want to prevent the country from being developed.

President Mahinda Rajapaksa added that Sri Lanka is one of the few countries in the region where electricity is provided for domestic and industrial purposes round the clock.

The President said the Government has focused on alternative power sources such as wind power.

He said the Government conducted all elections in time and sought fresh mandates from the people. “The process of conducting elections strengthens democracy,” he added.

President Rajapaksa said that the country faced insurrections and terrorism due to the lack of a proper mechanism to develop the country.

“We did not have a proper program to build the country and this led to youth upheavals in 1971, 1988 and terrorism which engulfed the nation for nearly 30 years,” he added.

He said the entire country has been brought under a massive development drive.

The President added that new ports, Super high ways and new power stations are being constructed in the country.

President Rajapaksa added that the country has been in the path of progress since the victory of UPFA government led by him in 2005.

“The people of this country started hearing news about the country’s achievements in respect of all key sectors since the Government came into power in 2005”, he added. He paid special gratitude to the Government of China and the officials who helped complete the project in time.

The President added that all developed countries in the world laid more focus on the development of the power and energy sector.

Home » President at Norochcholai: People rejected those who betrayed country