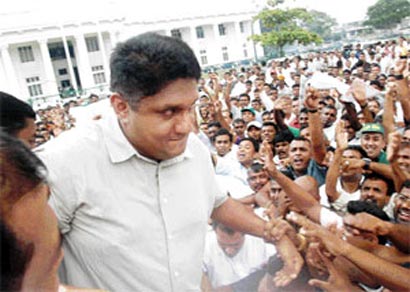 After weeks of publicly opposing UNP leader Ranil Wickremesinghe the Sajith Premadasa Group yesterday accepted his leadership and agreed to work together.

Informed sources told The Island that despite all the challenges thrown at Wickremesinghe, no one who attended yesterday’s Working Committee Meeting at the party headquarters, Sirikotha, had asked him to step down and hand over the reins to Co-Deputy Leader Karu Jayasuriya.

The proceedings which lasted nearly four hours concluded with all present pledging to work for the party’s victory at the forthcoming elections to 23 local authorities scheduled for October. Sixty of the 67 members appointed so far to the 95 member WC were present including the two newest entrants Harin Fernando and Ruwan Wijewardena.

A proposal to suspend Rosy Senanayake for publicly branding the UNP Constitution as ‘illegal’ was shelved after the intervention by several members, including Jayasuriya and Premadasa. The WC agreed that any repetition would be met with stern disciplinary action.

The court case filed by Maithri Gunaratne has only challenged the validity of 15 appointments to the WC and not the legality of the entire body or the UNP Constitution. For anyone to claim otherwise was wrong and tantamount to breach of party discipline, Wickremesinghe said, according to sources.

He had also pointed out that if the said 15 appointments were ‘illegal’ as claimed, those concerned should leave the meeting immediately, which prompted Dayasiri Jayasekera, who is one of the respondents in the court case in his capacity as Deputy Chief Opposition Whip, to question if the reference included him and attempted to walk out, but several members had pacified Dayasiri with Harin escorting him back to his chair, sources said.

Premadasa, according to sources, while airing his grievances said that he was willing to work on the basis of the agreements reached on March 23, 2011 with a view to making the UNP victorious once again.

Jayasuriya had said that he was neither power hungry nor on a mission to oust the leader, but was only interested in party unity and was willing to work with anyone to achieve the objective, sources said.

Ravi Karunanayake, whose appointment as National Organiser has been challenged in court, said that he had already spent around Rs.2 million defending himself and queried why he had to do that if Wickremesinghe had favoured him as alleged.