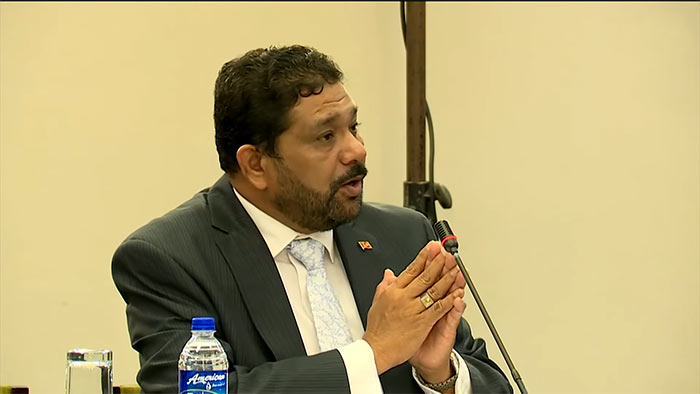 Former Governor of the Western province Azath Salley yesterday told the Parliamentary Select Committee probing the Easter Sunday carnage that former Defence Secretary Gotabaya Rajapaksa had worked closely with Sri Lanka Thowheed Jamaath, which was one of the organisations responsible for the April 21 attacks.

Testifying before the PSC, which met yesterday for the fourth time, the former Governor said that Rajapakasa, as the Secretary Defence, had maintained links with the SLTJ.Salley said that the SLTJ had around 10,000 active supporters throughout the country.

He said that while he was the Governor, he had warned three times of the possible threats from the Thowheed Jamaath.

He said one week before the Easter Sunday disaster,

he had met President Maithripala Sirisena during a function in Batticaloa with the IGP present. “I informed him that SLTJ had split and one of the splinter groups by the name Ceylon Thowheed Jamaath was operating in Malwana. The IGP called an ASP and instructed the latter to take preventive measures. The ASP said that he couldn’t prevent people from attending prayers. Then I pointed out to him to conduct prayers in groups there should be at least 40 persons. The CTJ operatives rented private properties and conducted prayers there”, he said.

Salley said that all defence secretaries since 1994 should be held responsible for the Easter Sunday disaster. “Since 1994, we have been warning that there were some fundamentalist elements operating in our community. In 2017, I called in public for the arrest of Zahran Hashim while I was on a TV show. I called for his arrest after he had led marches in the Eastern province under ISIS banners.

Salley demanded to know why relevant authorities had failed to arrest Abdul Razik, who promoted violence in public. “Before I tendered my resignation as the Governor I asked the same question from the President. Then he discussed something with the acting IGP and the matter ended there.

“Following the Easter Sunday disaster, I pointed out to the IGP that those who carried out the suicide attacks were the very same persons whose names we had already submitted to them.

During the 100-day government, I personally asked Prime Minister Ranil Wickremesinghe not to appoint Haleem as the Minister of Muslim Affairs. Haleem’s brother assisted Muslim extremists. Haleem recognised the mosques of the extremists.”