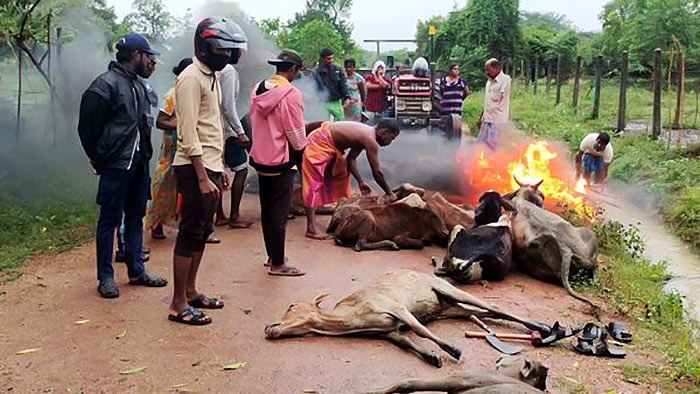 The samples of the dead livestock in the Northern and the Eastern Provinces have been sent for laboratory tests to ascertain the cause of death, the Agriculture Ministry said.

The Ministry said the number of cattle, buffaloes and goats which suddenly died amidst a change of weather patterns in the area, had exceeded 1,000.

According to the information collected by the Ministry’s Livestock Division, 358 cows had died in the Northern Province, while another 352 cows were in serious condition.

“It is assumed that the low temperature that prevailed in the area during Cyclone Mandous was the reason behind the large number of cattle deaths. However, laboratory tests are being conducted to confirm their cause of death,” the Ministry said.

The Provincial Livestock Directors have launched special awareness programmes to advise the public not to consume, sell or transport the cattle, which suffered sudden deaths.

The Ministry said that the cattle, which were in serious conditions, were gradually improving after the cold weather conditions ceased.

Our Northern Province Correspondent Rasula Dilhara Gamage reported that a team of officials arrived in Mullaitivu to investigate the cattle deaths. In order to protect the remaining cattle in the area, the people were seen making fireplaces to warm them.

Meanwhile, President Ranil Wickremesinghe ordered to suspend the transportation of beef and mutton at district and provincial level with immediate effect in order to safeguard public health considering the sudden death of cattle, buffalos and goats in the Northern and Eastern Provinces.

However, the President has ordered to suspend the transportation of beef and mutton at the district and provincial level with immediate effect.

The President has also instructed the relevant district officers and the Police to act responsibly in this regard. Cattle, buffaloes and goats have suddenly died in the vicinity of Kilinochchi and Mullaitivu in the Northern Province and Trincomalee, Batticaloa and Ampara Districts in the Eastern Province on Thursday (December 08) and Friday (December 09).

Accordingly, a team of veterinarians and officers from the Animal Health Division of the Peradeniya Head Office of the Animal Production and Health Department collected the specimens of the dead animal from Kilinochchi, Mullaitivu, Trincomalee, Batticaloa and Ampara districts today. Director General of the Department of Animal Production and Health Dr. Hemali Kothalawala said that specimens of animals will be subjected to laboratory tests at the Gannoruwa Veterinary Research Institute today and tomorrow.