Sanath refutes malicious reports against him 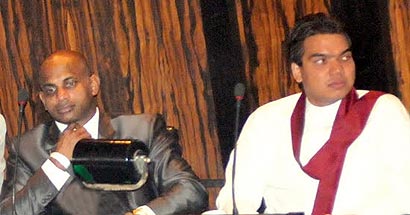 Sri Lanka’s star batsman Sanath Jayasuriya strongly and remorsefully reject malicious reports against him and claims that these are sadistic attempts by his political opponents to damage his political career.

A website believed to be financed by a discarded politico who has joined the United National Party recently and is famous for intermittently publishing doctored and wicked news items about the President and his family members leveling illusory corruption charges, published in his Website on 21st that “Former Sri Lanka Cricket captain and UPFA MP Sanath Jayasuriya has said that President Mahinda Rajapaksa and Namal Rajapaksa have misled him with false promises that he would be included in Sri Lanka’s cricket world cup team” . He was nicknamed as Goebbles due to the intensity of his fictitious reports during the Presidential and General Electons.

The news item also said that “ Jayasuriya had added that he was also hurt by objections raised by his former colleagues Sangakkara, Mahela, Dilshan, Muralitharan, Lasith Malinga, Thilan Samaraweera, Upul Tharanga and Dilhara Fernando for his inclusion in the cricket team”. The news item states that the MP Jayasuriya further said that “ politics has now ruined his sports career and that he did not like politics any more”. The report also reveals that Mr. Jayasuriya has made these comments to one of his close friends.

This news item was reproduced in a Weekend English Newspaper without mentioning Mr. Jayasuriya’s name but carrying the whole story under the caption “Politics and Cricket”.

When contacted for clarification, Mr. Jayasuriya informed that this is a vicious and malicious act of the greenhorn in the UNP envious of his political popularity and the whole story is baseless and he has never spoken to anyone at any time about the matters mentioned in the report. He said that this is not the first time that this discarded politico has attempted to create rift between him and Mr. Namal Rajapaksa and there were similar attempts made previously as well. He further said that he called the Editor and Deputy Editor of the concerned Weekend English Newspaper and refuted the whole report.(niz).

6 Responses to Sanath refutes malicious reports against him