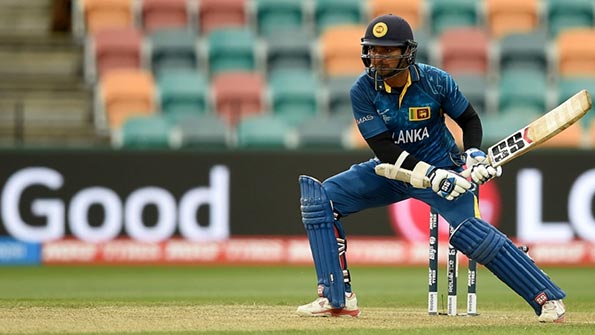 Kumar Sangakkara created One Day International cricket history today at the Bellerive Oval during their ICC World Cup 2015 Pool A match against Scotland.

In the history of 3,631 ODIs before today, no batsman had scored 4 successive centuries. But on Wednesday, Sangakkara became the first ever batsman to achieve the feat. He brought up the historic ton, in 86 balls, with a couple on the last ball of the 34th over by Kyle Coetzer. This was Sangakkara’s 25th ODI ton in 403rd match.

Going into the match with three consecutive tons at World Cup, which is also a new record, Sangakkara continued his dream run with the willow. Sangakkara’s four hundreds in World Cup so far are – 105 not out Vs Bangladesh, 117 not out Vs England, 104 Vs Australia and 124 today.
Previously there have been batsmen registering three-figures scores in 3 innings in a row. But never 4 in 4. Ross Taylor (New Zealand), Quinton de Kock (South Africa), Zaheer Abbas (Pakistan), Herschelle Gibbs (South Africa), Saeed Anwar (Pakistan), AB de Villiers (South Africa) and Sangakkara had achieved this. Opting to bat first after having won the toss, Sri Lanka were put on track for a big total by the 37-year-old Sangakkara and Tillakaratne Dilshan, who also hit a hundred. Playing in his final World Cup, Sangakkara has decided to bow out on a high.

His batting exploits in the tournament have been outstanding. He is also the first batsman to hit 4 centuries in a single World Cup. He now has overall 5 tons in World Cups, joint second with Ricky Ponting (Australia). Sachin Tendulkar has most World Cup centuries with 6.