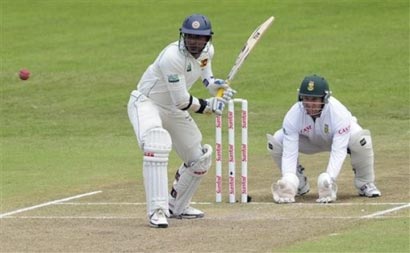 Kumar Sangakkara made his first important contribution of the series, while Thilan Samaraweera and Dinesh Chandimal made their second each of the match to steer Sri Lanka’s lead towards match-winning proportions. Sangakkara’s first century in South Africa has left the home side needing to pull off the highest ever chase in Durban, and Sri Lanka still have five wickets to push that target even higher.

Sangakkara, the world’s No. 1 Test batsman, came into this innings with scores of 0, 1 and 2 in the series, and could have been dismissed on 3 in the day’s first over. After overnight rain delayed the start of play by an hour, South Africa’s quick bowlers were on top of their game in the morning. Morne Morkel got the first ball to zip past Sangakkara’s outside edge. Three deliveries later he induced a nick only to see Mark Boucher’s late dive distract Graeme Smith from pouching a catch at slip.

There are plenty of theories about what helps fast bowlers at Kingsmead. The Green Mamba is a usual suspect, but today the talk was about the change in wind direction that would help the ball jag around. It was overcast in Durban as well, but there was still no dramatic swing or seam for the South Africa fast bowlers.

That didn’t stop them from probing away before lunch. Morkel got his customary extra bounce to hassle the batsmen, Dale Steyn got a hint of away swing, and Marchant de Lange also impressed early on. Tharanga Paranavitana had a torrid time, regularly beaten outside off and struck on the back by a short ball. Eight of his nine runs came through not entirely assured glides past gully, before his innings ended with an edge to fourth slip.

When Mahela Jayawardene was dismissed soon after – padding up to a de Lange incutter which would have gone on to hit off stump – South Africa were sensing a way back into the game despite conceding a 170-run first-innings lead.