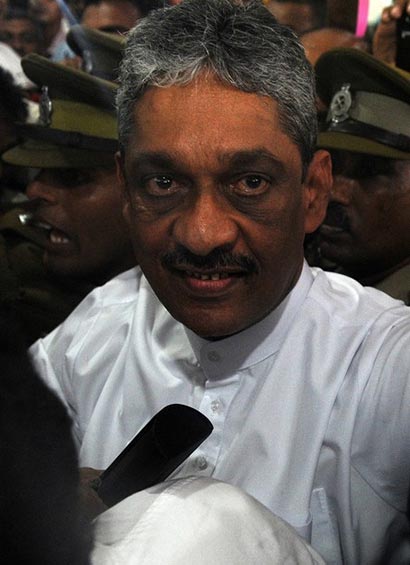 Former Army Commander Sarath Fonseka was released from the Welikada prison a short while ago after being granted a Presidential pardon.

The Supreme Court today (May 21) allowed the withdrawal of two pending appeals by Sarath Fonseka’s counsel. Court has granted approval for the withdrawal of the appeal on the ‘white flag’ case and the special appeal challenging the verdict of the second Court Martial.

Fonseka, who was discharged from hospital today morning, was presented before the Supreme Court a short while ago.

The attorneys appearing on behalf of the former army chief had stated that the President has pardoned the petitioner, according to provisions of the constitution and that therefore he does not wish to continue with the petitions.

He was taken from the Supreme Court to the Welikada Prison where he was thereafter released while a large crowd had gathered outside the prison to greet the former Army Commander.

Former Army Commander Sarath Fonseka, who led the Sri Lankan army to victory against the LTTE, was in detention since February 2010 following his unsuccessful bid at the Presidential election earlier that year in which Mahinda Rajapaksa was elected to his second term.

In September 2010, a court martial sentenced him to 30 months imprisonment for corruption related to irregularities in military procurements during his time as army chief. He also lost the parliamentary seat he won in the April 2010 polls.

An earlier court martial also found him guilty of interfering in politics while in uniform and stripped him of his rank and pension.

Fonseka was arrested and convicted by both military and civil courts and stripped off all military ranks as of August 2010 while the US State Department named him a political prisoner in its 2010 Human Rights report.

Sarath Fonseka was then found guilty by a divided decision in the case regarding the ‘White Flag’ statement and sentenced to three years in prison by the Colombo High Court on November 18, 2011.

The verdict was divided 2:1 and was given by the High Court bench headed by Judge Deepali Wijesundara and comprising Judges DMPD Waraweva and Zulfiqar Razin.

Justice Waraweva giving his judgment deliberated that Fonseka was not guilty on all three charges while Justice Wijesundara and Rashim found Fonseka guilty of the first charge and found him not guilty on the second and third charges.

He was accused of inciting violence following an interview given to the Sunday Leader, alleging that Defence Secretary Gotabaya Rajapaksa gave an illegal order not to accommodate any LTTE cadres attempting to surrender with white flags during the closing stages of the war and that troops had shot dead a number of Tamil Tiger separatist leaders when they tried to surrender.

However, Fonseka maintained that that the published comments had misquoted him adding that the journalist Fredrica Janz had distorted a reply that he had given to a question that she had put forward in her own words in order to build this story.

Sarath Fonseka, who was at the time serving his 30-month jail term was sentenced to three years in prison and fined Rs.5,000.

Fonseka appealed the decision while the petition is to be taken up at the Supreme Court.

Sarath Fonseka along with his son-in-law Danuna Tilakaratne and Director of HiCorp Pvt. Ltd. Wellington De Hoedt were also accused of defrauding the Army by purchasing military hardware going beyond the tender procedure.

Sarath Fonseka was acquitted by the Colombo High Court of the charges brought against him in the Hicorp fraud case citing that he could not be sentenced twice for the same offence as the Court Martial had already found him guilty of the charges.

Fonseka continued to serve his three-year sentence amidst mass protests and pressure on the government by the opposition parties and international powers to facilitate the former army commander’s release.

Sarath Fonseka was granted conditional bail on May 18 by the Colombo High Court in the case of harbouring army deserters during the Presidential election.

The State Attorney informed court that the government does not object to the bail appeal by the former Army Commander, who was then ordered released under a cash bail of Rs. 1 million and two personal bails of Rs. 2.5 million each.

The Colombo High Court also barred Sarath Fonseka from leaving the country however stating that he would be required to seek permission from the court in order to do so.

The President had made it known to the media and those close to Fonseka that the country was at a juncture in which it would be in its interest to release Fonseka while following separate meetings with Anoma Fonseka and Tiran Alles, it was announced that Fonseka would be released.
The President signed the necessary papers for Sarath Fonseka’s release on May 18 and handed them over to the chief of Presidential staff before leaving for Qatar that evening.

Presidential Spokesman Bandula Jayasekara told Ada Derana that the release papers were scheduled to be sent to the Ministry of Justice today (May 21).

Fonseka who was receiving treatment at the Nawaloka hospital for an illness pertaining to his lungs was discharged from hospital today after which he was taken to the Supreme Court.

The Supreme Court allowed the withdrawal of two pending appeals by Sarath Fonseka’s counsel. The Court granted approval for the withdrawal of the appeal on the ‘white flag’ case and the special appeal challenging the verdict of the second Court Martial.

Fonseka, who was taken back to the Welikada Prison was released shortly thereafter. 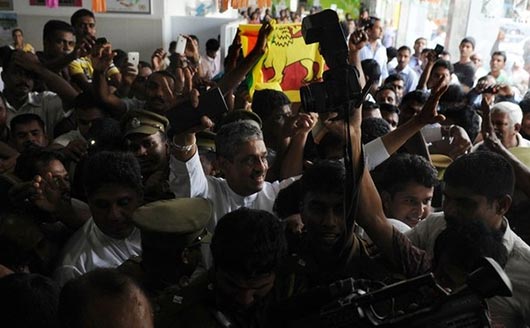 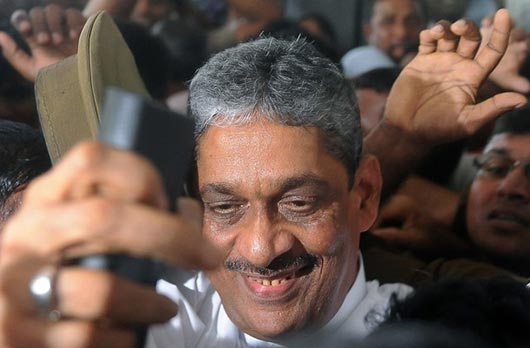 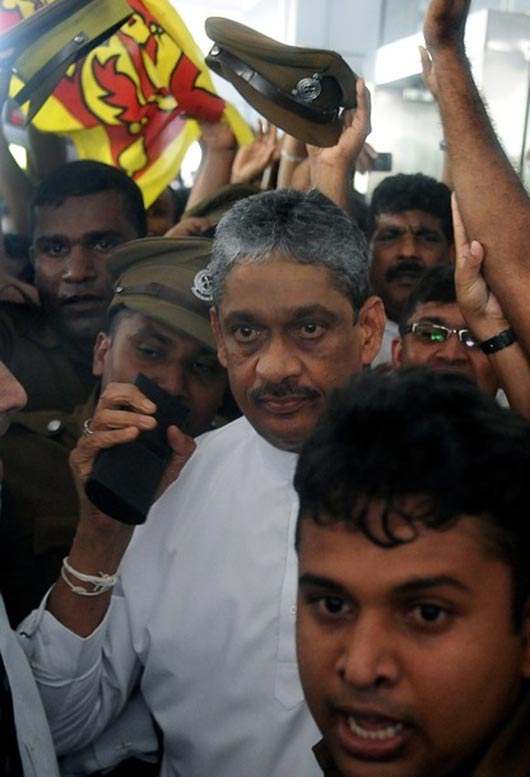 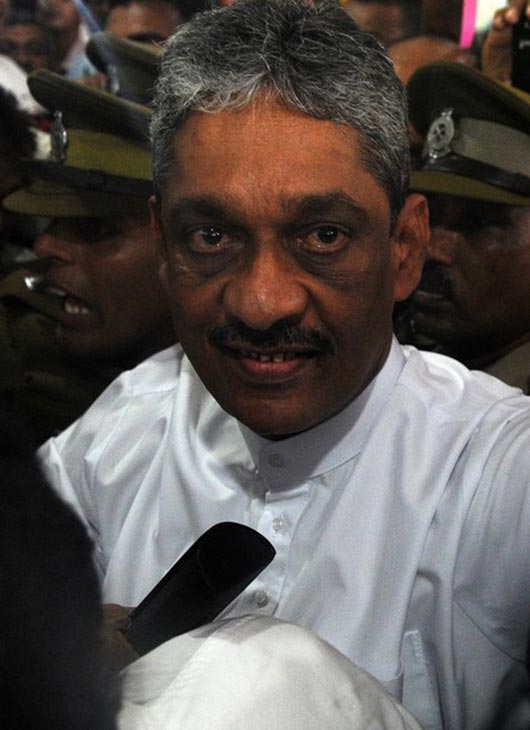