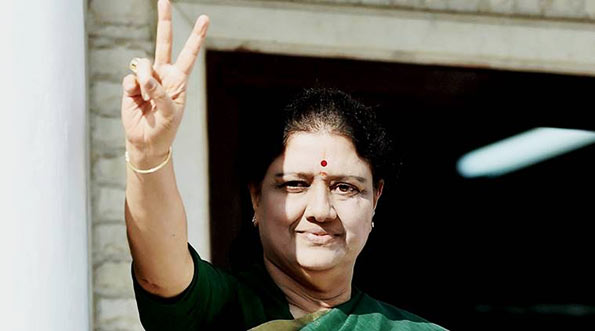 In a major blow to AIADMK General Secretary Sasikala Natarajan, the Supreme Court on Tuesday pronounced Natarajan guilty and announced a 4-year jail term in the 21-year-old Disproportionate Assets (DA) case against her.

She is expected to serve over 3 years in jail. The apex court has asked Sasikala to surrender as soon as possible. As per the reports, the police have reached the Golden Bay Resort to arrest the general secretary of AIADMK.

All the convicted persons have to serve the remaining part of the sentence, said Supreme Court while pronouncing its judgement against Sasikala. Sasikala will have to surrender herself forthwith.

As per the reports, Sasikala will not be able to contest elections for 6 years.

Now that the Supreme Court has shattered Sasikala’s Chief Minister dreams after convicting her in the DA case, Sasikala is now expected to serve over 4 years in jail. Amid this, it is likely that the caretaker Chief Minister O Panneerselvam will now be handed over the charge of the state.

The Panneerselvam supporters have started celebrating expecting a positive turn for the OPS camp after 8-day political tussle between Sasikala and Panneerselvam.

While the power tussle was going on between the two warring factions, more and more MLAs had started joining the OPS camp.

Ahead of the Supreme Court’s verdict in the Disproportionate Assets (DA) case, which convicted Sasikala guilty, one more AIADMK MLA from Mettur Semmalai extended his support to caretaker chief minister O Panneerselvam joining his camp.