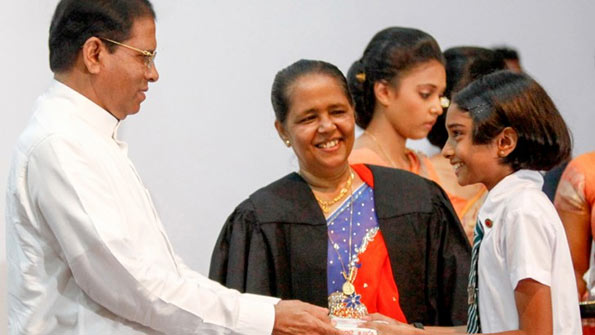 President Maithripala Sirisena says the schools should take the lead in creating a disciplined future generation in an environment where the lives of mothers and children value in financial terms and people who do cruel things to animals exists in the society.

He made these remarks participating in the annual prize giving ceremony of St. Joseph’s Girls School, Kegalle, today (24).

The President further said that even though a country may develop with physical resources, if the people living there may not value the spiritual development they cannot achieve the benefits of the development.

President Sirisena said as a result of the initiatives taken by the Government to strengthen the free education system of the country today, the children are receiving  highest marks in exams. He further said that several educational institutions will be built in this year to uplift the vocational and  tertiary education in this country.

Today, women in Sri Lanka make the highest contribution to foreign exchange revenue and to the national economy of the country and the aim of the Government is to create more skilled and highly productive workforce while developing the human resource of this country towards innovative economy.

The President presented awards and certificates to the students who showed outstanding performance.

He also presented awards to the teachers for their immense contribution to the school.

The Principal of the school, Mrs P.R. Mallika presented a special memento to the President to mark his visit to the school.

People’s Representatives, including Ministers Kabir Hashim, Ranjith Siyambalapitiya, State minister Champika Premadasa, Chief Minister of Sabaragamuwa Province, Maheepala Herath, the Principal, staff of the school and many others participated in the event.