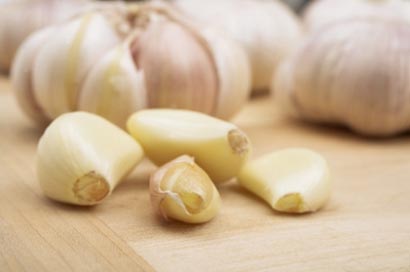 Scientists have isolated a compound in garlic that would fight with hundred times more potency than an antibiotic in combating bacteria that causes intestinal illness.

The compound present in garlic, called diallyl sulphide, is capable in fighting Campylobacter bacteria which causes the most commonest kind of abdominal disorder with diarrhea, cramping, pain, fever and nausea sometimes leading to more serious other conditions of food poisoning the researches said.

Some 2.4 million Americans alone are affected by Campylobacter every year, according to the Centers for Disease Control and Prevention.

“This work is very exciting to me because it shows that this compound (diallyl sulphide) has the potential to reduce disease-causing bacteria in the environment and in our food supply,” says Xiaonan Lu, postdoctoral researcher at the Washington State University, who led the study.

Lu and colleagues looked at the ability of the garlic compound, diallyl sulphide, to kill the bacteria when it is protected by a slimy biofilm that makes it 1,000 times more resistant to antibiotics, the Journal of Antimicrobial Chemotherapy reports.

They found the compound can easily penetrate the protective biofilm and kill bacterial cells by combining with a sulphur-containing enzyme, changing the enzyme’s function and effectively shutting down cell metabolism, according to a Washington statement.

The researchers found that diallyl sulphide was as much as 100 times effective than much of the antibiotics erythromycin and ciprofloxacin and would often work in a fraction of the time.

“This is the first step in developing or thinking about new intervention strategies. Campylobacter is simply the most common bacterial cause of food-borne illness in the United States and probably the world,” says Michael Konkel, study co-author who has been researching Campylobacter jejuni for 25 years.

Listeriosis, a serious infection usually caused by eating food contaminated with the bacterium Listeria monocytogenes, is an important public health problem in the United States. The disease primarily affects older adults, pregnant women, newborns, and adults with weakened immune systems. However, rarely, persons without these risk factors can also be affected. The risk may be reduced by following a few simple recommendations.

Pregnant women: Pregnant women typically experience only a mild, flu-like illness. However, infections during pregnancy can lead to miscarriage, stillbirth, premature delivery, or life-threatening infection of the newborn.

Persons other than pregnant women: Symptoms, in addition to fever and muscle aches, can include headache, stiff neck, confusion, loss of balance, and convulsions.

E. coli are bacteria that normally live in the intestines of humans and animals. Although most strains of this bacteria are harmless, several are known to produce toxins that can cause diarrhea. One particular E. coli strain called 0157:H7 can cause severe diarrhea and kidney damage.

Anyone of any age can become infected with E. coli 0157:H7, but children and the elderly are more likely to develop serious complications.

The bacteria are acquired by eating food containing the bacteria. The bacteria live in the intestines of some healthy cattle, and contamination of the meat may occur in the slaughtering process. Eating meat that is rare or inadequately cooked is the most common way of getting the infection. Infection can also occur after consuming foods such as lettuce, alfalfa sprouts, salami, and unpasteurized milk, juice or cider. Person-to-person transmission can occur if infected people do not wash their hands after using the toilet.

People infected by E. coli 0157:H7 can develop a range of symptoms. Some infected people may have mild diarrhea or no symptoms at all. Most identified cases develop severe diarrhea and abdominal cramps. Blood is often seen in the stool. Usually little or no fever is present.