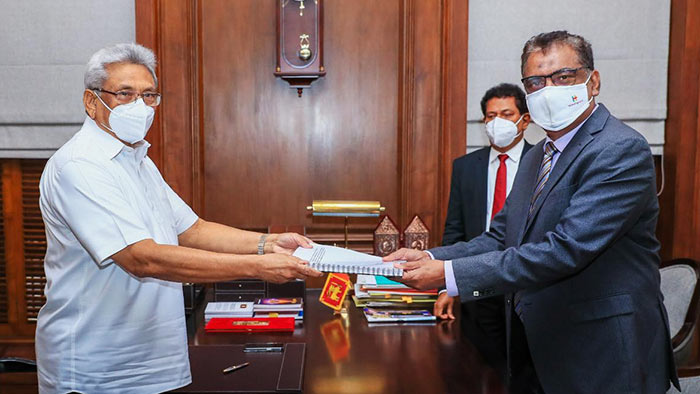 The second interim report of the Presidential Commission of Inquiry (PCoI) for Appraisal of the Findings of Previous Commissions and Committees and the Way Forward was handed over to President Gotabaya Rajapaksa by Supreme Court Judge A. H. M. D. Nawaz at the Presidential Secretariat, on Friday (February 18).

President Rajapaksa appointed this Commission of Inquiry to investigate, inquire into and report or take necessary actions on findings of preceding Commissions or Committees appointed to investigate into human rights violations, serious violations of International Humanitarian Law (IHL) and other such offences on January 21, 2021. Supreme Court Judge A. H. M. D. Nawaz has been appointed as the Chairman of the Commission.

The first report of the Commission was submitted to the President on July 21, 2021.

In preparing the second 107-page report, the Commission made a number of recommendations based on the testimonies of 75 residents of the Jaffna and Kilinochchi districts who had faced the war and who had related experiences with the war.

It has been recommended to immediately investigate the findings of the Paranagama Commission appointed in 2015 and to file a court case or provide compensation accordingly.

Those who testified before the Commission requested the Government’s assistance to uplift their financial status and this has also been recommended by the Commission.

Terrorists are not allowed to be commemorated but the Commission has recommended to grant the right to commemorate the death of a relative occurred during the war in private.

Chairman of the Commission Supreme Court Judge A.H.M.D Nawaz said that the final report can be submitted to the President by next June.

Secretary to the President Gamini Senarath was also present at this event.