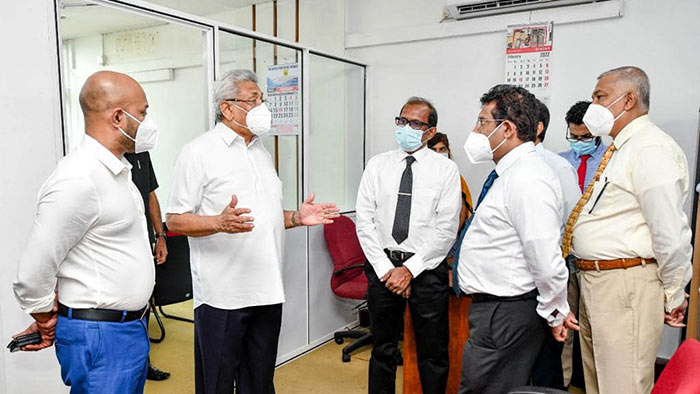 President Gotabaya Rajapaksa said that only the national interest should be taken into consideration when implementing targeted projects. The President further said that the country will face serious setbacks due to the delays in implementing projects planned for the future.

The President made these remarks during the sudden inspection visit to the Sri Lanka Sustainable Energy Authority at Ananda Coomaraswamy Mawatha, Colombo 07, yesterday (February 18).

This Authority was established by the Sri Lanka Sustainable Energy Authority Act No. 35 of 2007.

The objectives of the Sustainable Energy Authority are to act as a leading institution to enhance energy efficiency throughout Sri Lanka, to facilitate productive, efficient and environmentally friendly energy needs, as well as to identify sustainable energy resources in advance.

The President visited the Energy Authority’s Demand Side Management, Research, Strategic and Energy Management Divisions and inquired the relevant officials about respective functions of the units and their planning.

The purpose of the President’s visit is to meet the officials of the Sri Lanka Sustainable Energy Authority and inquire into the possibility of exploring the use of renewable energy sources such as water, solar, wind and biomass to generate electricity.

President Rajapaksa pointed out the need to remove obstacles in the energy sector preventing foreign investments. The President also instructed State Minister Duminda Dissanayake to expedite the project of installing solar panels on the roofs of 100,000 houses and to provide its benefits to low income earners.

State Minister Dissanayake said that steps will be taken to amend the Electricity Board Act with the input of all stakeholders and submit it to Parliament immediately in order to rectify the shortcomings in the Act.

In line with the ‘Vistas of Prosperity and Splendor’ policy framework, the government aims to use renewable energy sources to generate 70% of total power supply by 2030. The visit also explored the possibility of getting the contribution of renewable energy sources within a short span of time as a solution to the current energy crisis in the country.

Chairman of the Sustainable Energy Authority Ranjith Sepala said that 1,258 megawatts from renewable energy sources have been added to the national grid by 2021.

The Chairman pointed out that achieving the government’s target of generating 70% of the total power supply from renewable energy sources by 2030 is not a difficult target.