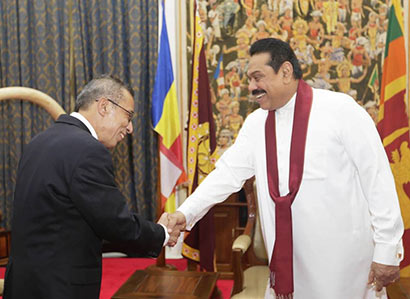 The Secretary General of SAARC (South Asian Association for Regional Cooperation) Mr. Arjun B. Thapa called on President Mahinda Rajapaksa at the President’s House in Kandy this morning.

President Rajapaksa informed the Secretary General that Sri Lanka is looking forward to participating in the 18th SAARC Summit, which will be held in Kathmandu in November of this year.

The Secretary General, who is currently in Sri Lanka on his first official visit since assuming duties, apprised the President on the current state of affairs of the regional organisation with special reference to the preparations being made for the Summit in November.

President Rajapaksa proposed two specific initiatives for consideration by SAARC member countries. The President stressed the importance of SAARC organising a youth forum to bring together young people in the region in order to address issues that impact youth in this part of the world. President Rajapaksa also proposed a programme to develop a circuit that would promote connectivity with regard to religious and cultural places of interest in the SAARC region.

The discussion between the President and the Secretary General also focused on the renewed interest among members in further strengthening SAARC within the region while also establishing itself as a contributor to the economic prosperity not only in South Asia but also in the international arena.