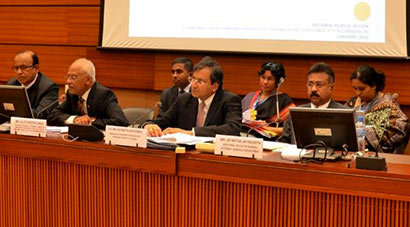 Secretary to the President Lalith Weeratunga who briefed Permanent Representatives to the United Nations in Geneva at the Palais des Nations on Tuesday (21st January 2014) on ‘Progress in the reconciliation process in Sri Lanka’, has said the Government of Sri Lanka has done all that was humanly possible to implement the recommendations of the National Plan of Action on the implementation of the LLRC, since its approval by the Cabinet of Ministers in July 2012.

Weeratunga, who chairs the Committee Monitoring the National Plan of Action on the Implementation of the National Plan of Action of the LLRC who informed his audience of the state the country was left in following a near thirty year terrorist conflict which ended with the defeat of LTTE in May 2009, the effort that went into restoring normalcy to the lives of those affected due to the conflict and detailed the action taken by the Government over the past eighteen months to give effect to the recommendations of the LLRC in the areas of International Humanitarian Law Issues, Human Rights, Land Return & Resettlement, Restitution/Compensatory Relief and Reconciliation.

He elaborated on key progress, including the successfully concluded Northern Provincial Council elections, the Government’s cooperation with the Chief Minister in continuing the massive development effort that had been undertaken in the area, developments relating to the Commission of Inquiry into alleged disappearances which recently held its first public sittings in Killinochchi, and in this regard, the cooperation with the ICRC as well as the recent Census on deaths/injuries to civilians and property damages due to the conflict, the results of which are expected shortly. Noting Sri Lanka’s continued cooperation with the Office of the High Commissioner for Human Rights (OHCHR), Weeratunga said since the visit of the High Commissioner to Sri Lanka in August 2013, at the Government’s invitation, the Special Rapporteur on Internally Displaced Persons had visited Sri Lanka in December 2013 and the Special Rapporteur on the Human Rights of Migrants is scheduled to visit in May 2014. While the Special Rapporteur on the Right to Education had also been invited, he had indicated his inability to visit Sri Lanka in the current year. The government is giving due consideration to visits by other Special Rapporteurs .

During the Q&A session, while most of the countries that attended the briefing commended the government for its commitment to and efforts in implementing the LLRC recommendations, some questioned aspects of the implementation and the speed at which it was taking place. Many expressed the view that the international community should provide assistance to Sri Lanka and continue a constructive dialogue with Sri Lanka in dealing with human rights issues. Commenting on its own tragic experiences and continuing hardships in fighting terrorism, one country said “it is only the wearer who knows where the shoe pinches.”

Weeratunga thanked the international community for their support towards the implementation of the LLRC National Plan of Action. Responding to some of the concerns raised, he said the Government would take constructive suggestions on board. Weeratunga emphasized that the solutions to reconciliation cannot be found overnight and that trying to do so at the stroke of a pen could be detrimental to a sustained process. He explained some of the complexities involved such as language issues, lack of senior Tamil administrators in the public service due to the LTTE preventing their recruitment since the conflict started in the early 1980s, and the ground level issues in administration in the former theatre of conflict. These included the destruction of previous land records which had caused serious difficulties in establishing ownership of property, the destruction of valuable infrastructure, and the need to take the sensitivities of all communities on board. He said while Sri Lanka was fortunate to have a stable Government which continued to enjoy popular support, some of the recommendations also required evolving a consensus across the ethnic, religious, regional and political diversity in the country, in order ensure that solutions are sustainable. He emphasized the importance of the opposition including the Tamil National Alliance (TNA) joining the government to make the Parliamentary Select Committee (PSC) which had been constituted, fully functional. Weeratunga expressed regret that even responsible international figures were being misguided by parties with vested interests and gave instances of some such occurrences in recent times.

Responding to comments on Sri Lanka’s cooperation with the UN and international partners, Sri Lanka’s Permanent Representative to the UN in Geneva, Ambassador Ravinatha Aryasinha said very few countries would have cooperated as much with the UN, the OHCHR, the Human Rights Council (HRC), and international partners, as Sri Lanka had done in the past year. In addition significant work is taking place under the UN Development Assistance Framework 2013-2017, which covers the areas of Equitable Economic Growth and Sustainable Livelihoods, Disparity Reduction, Equitable and Quality Social Services, Governance, Human Rights, Gender Equality, Social Inclusion and Protection and Environmental Sustainability, Climate Change and Disaster Risk Reduction.

Responding to questions on what measures were being taken to prevent terrorism recurring in the country, Ambassador Aryasinha explained that while terrorism had been eradicated in Sri Lanka, many former LTTE cadre and sympathizers continued to be active, particularly in the western countries. He said that for these elements it was important to keep the pot boiling in Sri Lanka, as a means to stay relevant and to justify their continued existence in the more affluent host countries. He appealed to such countries to be very cautious of this fact, as it ran the danger of derailing reconciliation efforts in Sri Lanka.

Prior to the briefing to Member States, Weeratunga also met with UN High Commissioner for Human Rights, Ms. Navaneethem Pillay and updated her on developments that had taken place since her visit to Colombo in August 2013.

He also had discussions with the UN High Commissioner for Refugees Antonio Guterres at the UNHCR and the President of the International Committee of the Red Cross (ICRC) Peter Maurer, on ongoing collaboration between Sri Lanka and their respective organizations. 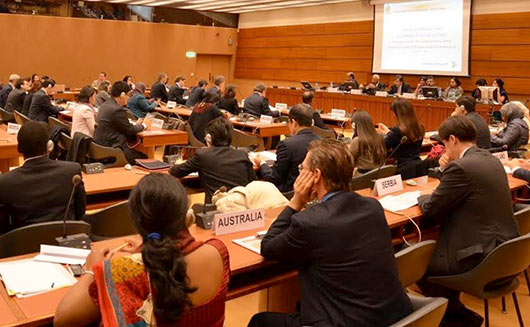