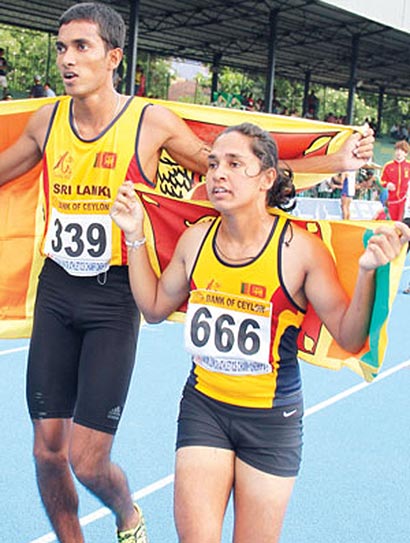 St. Joseph’s Balika, Kegalle athlete Shivanthi Kumari Rathnayake and Pasyala Central College runner Dulaj Madusanka created a piece of history on Sunday when they won country’s first ever 400 metres golds in the women’s and men’s categories respectively, in an Asian Junior Athletics Championship, as Sri Lanka commenced its medal hunt in the 15th edition of the championship, now in progress at Sugathadasa Stadium.

The golds in the 400 metres in the men’s and women’s categories were the first for Sri Lanka, not only in this championship but also in the entire history of the biennial event. The highest a Sri Lankan had achieved in this discipline was the silver medals won by Manoj Pushpakumara in the 2002 and 04 editions.

Apart from Olympians Susanthika Jayasinghe (200m) and Damayanthi Dharsha (100m) no other Sri Lankan has won a gold at this 15 edition old championship.

The victories in the men’s and women’s 400 metres and the high jump event which came within the space of several minutes seemed to ease a huge burden off the local officials, who were searching for the first medal until Sunday afternoon.

From team manager Susanthika Jayasinghe, assistant managers, Daya Rathnayaka, the president of the Sri Lanka Athletics Association and even some area association officials who had no say in her win were virtually on the track to congratulate Rathnayake soon after she crossed the finish line in a time of 55.91 seconds.

Competing in the fifth lane, Ratnayake was trailing at least three athletes, including compatriot Nadeeshani Handerson but edged them out in the last few metres to win the gold, ahead of Mondal Priyanka (56.01sec) of India and Andreyeva Olga (56.03 sec) of Kazakhstan, who had to settle for silver and bronze, respectively.

However, Rathnayake’s coach, A. D. Nandawathie was not content with her time and said that what she was looking at was qualifying for the IAAF World Junior Athletics Championship. She requested help from sponsors for her athlete’s future.

Nadeeshani Handerson was placed fourth in a time of 56.30 seconds.

Madusanka improved his personal best for the second time in the meet, when he clocked 47.36 seconds to beat Kimura Kazushi of Japan and Kaabi Bandar Atiyah of Saudi Arabia, in the last few metres. Although Madusanka entered the final with the best time in the heats, he was the sixth ranked athlete in his discipline on the eve of the championship. Xu Xiang Chao of China carried a seasonal best of 46.55 seconds to the championship, but was placed fourth behind Kazushi and Atiyah who had clocked sub 48 seconds performances, before the meet. Madusanka improved his personal best twice on the newly laid synthetic track and on both occasions, he also bettered the IAAF World Junior Athletics Championship qualifying standards.

The gold medal victories in the 400 metres took the attention of the crowds away from most other field events to such an extent that there was hardly any celebration when Madushani Siriwardena settled for silver in the women’s high jump.

2 Responses to Shivanthi, Madusanka create history with golds in 400 metres