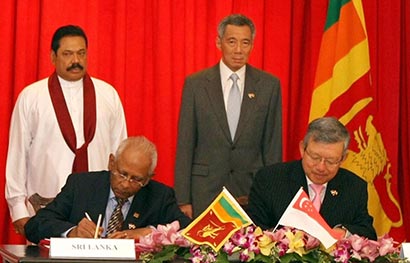 President Mahinda Rajapaksa who is on a two day visit to Singapore held bilateral talks with Singapore Prime Minister Lee Hsien Loong on February 15. At the end of the bilateral talks a memorandum of understanding (MOU) was signed on the development of business and investment relations between the Board of Investment of Sri Lanka and the Business Federation of Singapore.

It said: It is expected to get the institutional relations between the two countries strengthened and the relations among the private sectors consolidated through this MOU. Building a congenial atmosphere for business and investment in all economic sectors of Sri Lanka and Singapore, constant exchange of investment policies and information relating to relevant projects and an in increasing investment and business opportunities are the other objectives envisaged by this MOU.

‘Trade between Sri Lanka and Singapore during 2011 amounted to USD1.85 Billion and consequent to the end of terrorist atmosphere in Sri Lanka trade between the two countries has been increased by 53 percent.

A Guard of Honour was accorded to the President by the Singapore Army. After introducing the delegates of respective countries President Rajapaksa discussed with the President of Singapore a number of matters which are of common interest to both countries. Singapore President, Tony Tan Keny Yam who appreciated the on going reconciliation Programme stated that it is important for Sri Lanka to forget the past and to concentrate on the future prosperity of the country.

In response to the request made by President Rajapaksa to encourage Singapore investors to make investments in Sri Lanka, President Keng pledged to provide the necessary assistance.