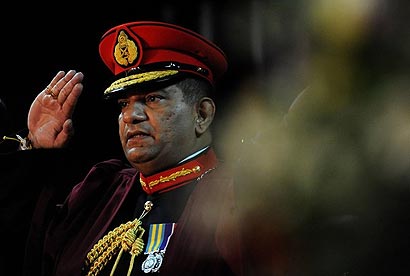 A Court of Inquiry, appointed by Army Commander Lieutenant General Jagath Jayasuriya to inquire into the observations made by the Lessons Learnt and Reconciliation Commission (LLRC) in its report on alleged civilian casualties during the final phase of the humanitarian operations and a probe as regards Channel-4 video footage irrespective of its authenticity or otherwise, are now in full progress.

Army Commander Lt Gen Jayasuriya stated that in view of a consistent policy, followed by the Sri Lanka Army from its inception in 1949 of maintaining zero tolerance towards any breach of humanitarian laws by its members during engagements such an inquiry is warranted, especially in view of the observations of the LLRC.

A Court of Inquiry is an initial fact-finding inquiry, akin to a non-summary inquiry by a magistrate. If there is a prima facie case disclosed against any person from the evidence led before the Court of Inquiry, a General Court Martial, is convened to try the alleged offenders. A General Court Martial has the jurisdiction that is identical to a High Court Trial-at-Bar and can award any sentence, including the death penalty.

The Court of Inquiry has already commenced its proceedings.

23 Responses to To inquire into LLRC observations: Army chief appoints Court of Inquiry