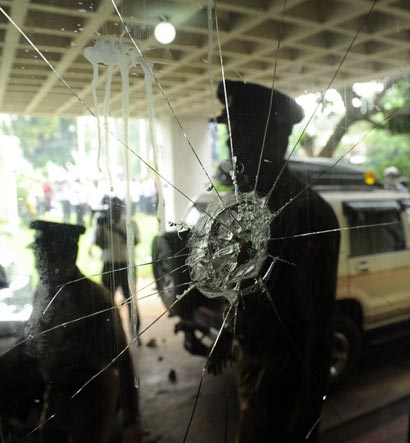 The Opposition Leader apologized to the UNP, all its members and the entire country for his inability to protect Sirikotha during Monday’s attack.

Wickremesinghe further stated that a complaint has been made to the Police in this connection.

He also stated that he always held media freedom in esteem but the media institutions should confine themselves only to their duties.

He added that media institutions have a right to telecast or broadcast news but they do not have any right to change leaders of political parties.

Wickremesinghe further said that an organization had telecast various programmes engaging in a “late campaign”. He added that he mentioned about it in his police complaint.

He also added that the Opposition could solve its problems on its own and asked media institutions to mind their own businesses. The UNP leader further stated that he learnt that an NGO in Germany funded a person who was removed from the UNP Working Committee.

He added that he had requested from the German ambassador in Sri Lanka to prevent those institutions from funding for such activities.

Wickremesinghe also requested the government to find out about these fundings as well.

The Opposition Leader made this observation making a special statement in Parliament yesterday.

He also said, as he answered earlier to the Chief Government Whip Minister Dinesh Gunawardena’s question, there was no change in the positions of Opposition Leader and UNP leader.