Sirimavo led the SLFP through all weather 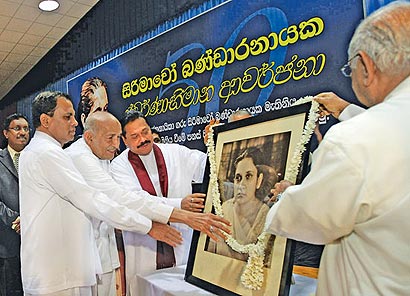 President Mahinda Rajapaksa yesterday asserted that Sri Lanka today is a country which protected and accrued on its State assets instead of selling them in line with the policies propagated by the late Sirimavo Bandaranaike who became the Worlds first Woman Prime Minister 50 years back.

The President was speaking at the 50th Commemoration of the late Sirimavo Bandaranaike becoming the first female Prime Minister in the World, held at temple trees with the participation of Sri Lanka Freedom Party members and leaders.

While identifying the late Premier as a fearless leader the President said that her economic policy was based on giving pride of place to local industries and protecting and further developing State assets. He noted that several prominent State institutions had come to be during her tenure such as State Banks, Sri Lanka Insurance corporation etc.

President Rajapaksa also fondly remembered that it was the late Premier who had backed him to get his first nominations to contest an election when the odds were against him.

He said that the late Sirimavo Bandaranaike had been a tower of strength to the Party and was a leader who had a thorough understanding of the Party cadre and was conscious to their needs.

He said that even today her policies were a tower of strength to both the Party and the country.

He said that the Government was intent on restoring State assets the people lost and infrastructure which was destroyed in all parts including the North and East.

Home » Sirimavo led the SLFP through all weather