Sirisena pledges to back President while strengthening SLFP 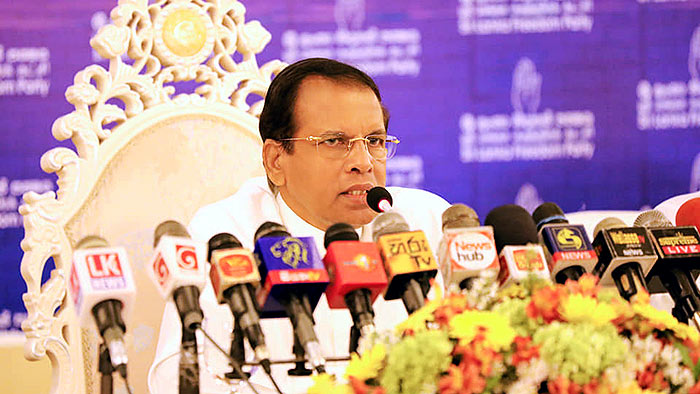 Former President Maithripala Sirisena said at the SLFP Kandy convention yesterday (30) that he would support the incumbent government under the leadership of President Gotabaya Rajapaksa while making every effort to strengthen his party so that it would form a future government.

Addressing the meeting attended by SLFPers holding ministerial posts, members of Parliament, organisers of constituencies and the office-bearers of the party, Maithripala Sirisena said it was possible for the SLFP to form a future government on its own as it has a history of making comebacks after crushing defeats.

The SLFP had been reduced to just eight seats in 1977, but at the 1989 election the party secured 64 seats, and in 1994, it had been able to form a government, said the former President.

Sirisena said the SLFP was a political organisation that had won the support and confidence of all communities of the country. “This was the policy of its founder leader, the late Prime Minister S.W.R.D. Bandaranaike and of Sirimavo Bandaranaike.

The SLFP had contributed to the victory of President Gotabaya Rajapaksa and that of present government.

Prior to attending the meeting at Grand Kandyan Hotel the party leaders paid homage to the Sacred Tooth Relic and paid courtesy calls on the prelates of Malwatta and Asgiriya.

2 Responses to Sirisena pledges to back President while strengthening SLFP

Home » Sirisena pledges to back President while strengthening SLFP