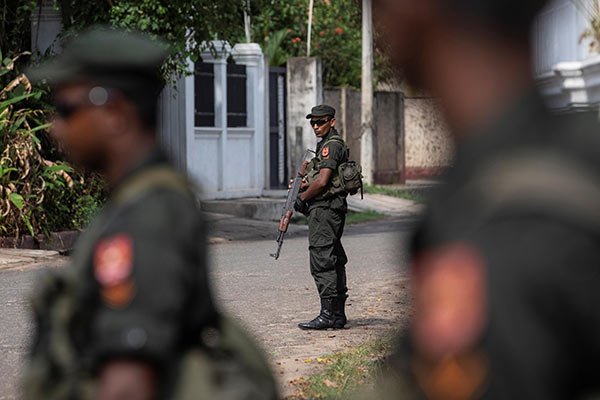 More than 60 persons were arrested yesterday along with a large number of weapons, the National Thowheed Jamath (NTJ) propaganda material and clothes similar to military uniform during search operations carried out by Police, STF and the tri-forces in several parts of the country, according to the Army and the Police.

The Kuliyapitiya Police detected a large volume of fabrics similar to saffron robes worn by Buddhist monks and several garments that resemble military uniform, yesterday, at an unauthorised mosque and a house in Yayawatta, Kuliyapitiya. The Police carried out the raid with the assistance of the Army. Police arrested the head of the mosque and a female suspect.

Police also arrested 14 suspects including the chairman of the Wellawa branch of National Thowheed Jamath during a search operation at Hadirawalana, Wellawa. Over 200 security force personnel took part in the raid and they took into custody six swords, four daggers, 15 DVDs containing NTJ propaganda and 20 NTJ banners.

The Horowpathana Police have taken into custody a number of suspicious items from an Arabic School run by a suspect who was arrested in the same police area, on Monday.

The suspect is believed to have been a close associate of extremist Zahran Hashmi, the mastermind of Easter Sunday suicide bombers. Following interrogation, Horowpathana Police, along with the personnel from the Kebithigollewa STF camp and army intelligence, raided an Arabic school, where the suspect was a Director. Among the items confiscated are letters that he has exchanged with the National Thowheed Jamath (NTJ).

The Kalpitiya Police arrested 31 suspects who were unable to reveal their identities and several suspicious vehicles yesterday morning in Mandalkuda, Kalpitiya. They were apprehended during a combined raid carried out by Police, Navy and the Air Force.

Out of those arrested ten are from Mannar. The vehicles taken into custody are registered in Western and Eastern Provinces.

The Pindeniya Police arrested three suspects who were in possession of hi-tech equipment at Kotiyakumbura. The arrests were made in a building owned by a businessman. Police also detected a high grade GPS receiver, mobile phones, cameras, petrol bombs, swords, knives, barbed wire, walkie -talkies and a number of passports. They were to be produced in courts and remanded.

Five persons were arrested at Kebethigollewa, on Tuesday, for possessing video recordings of the Easter Sunday bombings, photographs of Zahran Hashmi and photos and videos of the Wanathavilluwa jihadist training camp. They were arrested during a combined search operation conducted by the Police and the army. The five men are residents of Vavuniya, KKS and Kinniya, who were working in Kebethigollewa. Among those arrested are two men who were taking video footage of a security post in Hijragama along the Horowpathana road. The five men were to be produced before the Kebethigollewa Magistrate’s court, yesterday.

Soldiers attached to the army’s 11 division arrested 12 persons in Akurana along with swords and other military equipment. Three swords, parts of firearms, clothing that resemble military uniforms, posters, banners and CDs that contain NTJ propaganda, forged passports, NICs and birth certificates were taken into custody. The operation lasted for more than three hours.

(Source: The Island – By Rathindra Kuruwita and Cyril Wimalasurendre)