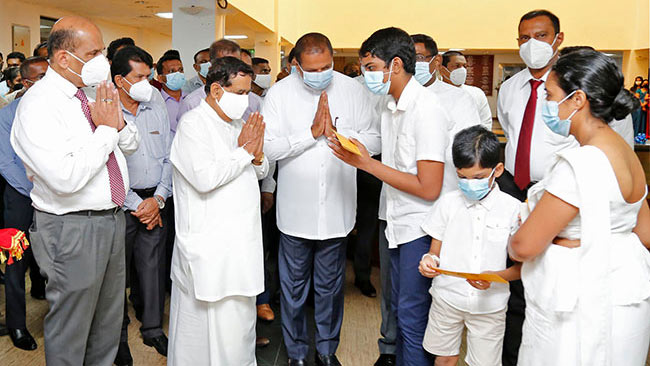 The Sri Lanka Bureau of Foreign Employment (SLBFE) on Monday handed over a financial grant of Rs. 2.5 million to the family of Priyantha Kumara who was brutally murdered in Sialkot, Pakistan.

The cheques worth Rs. 2.5 million were handed over to the wife and children of Priyantha Kumara by Labour Minister Nimal Siripala de Silva and State Minister of Foreign Employment Promotion and Market Diversification Piyankara Jayaratne at the SLBFE main office.

Meanwhile a Gujranwala anti-terrorism court on Monday extended the remand of 85 suspects for 14 days in the Sialkot lynching case in which Sri Lankan national Priyantha Kumara, a factory manager, was beaten to death over blasphemy charges and his body set to fire, Pakistani media reported.

The judge ordered to present the suspects again in the court on January 17 and directed the Punjab police to complete the investigation by the next hearing.

The suspects were presented in the court amid high security.

Politicians, religious scholars and people across Pakistan were equally shocked when on December 3, Kumara was lynched to death by a violent mob.

Reports emerged that factory workers disliked Kumara, who was a textile engineer, as he was a strict manager and he enforced discipline at the work place.

A first information report (FIR) was registered against hundreds of unidentified men, including workers of the factory. Scores have since been arrested and are facing investigation.

The Punjab government and the prosecution team in December decided to conduct the jail trial of the high-profile case due to security concerns.

After the incident, Pakistani Prime Minister Imran Khan spoke with Sri Lankan President Gotabaya Rajapaksa and assured him the culprits would be “prosecuted with full severity of the law”.