Speaker to give MPs laptops 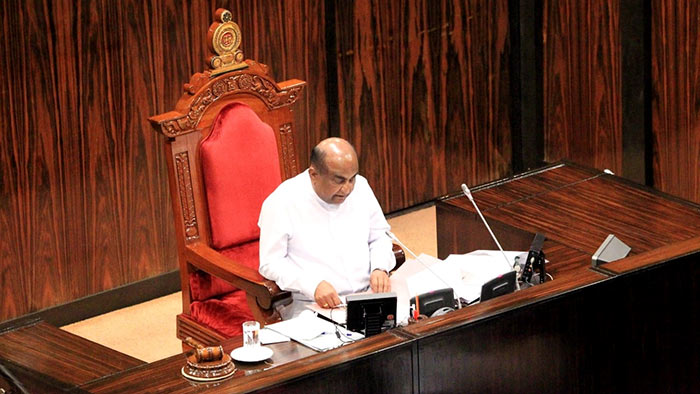 The Speaker said so when MPs complained that they could not take away the laptops that had been provided as they were fixed to their desks.

SJB Matara District MP Buddhika Pathirana raising a point of order said that various documents including annual reports and performance reports of ministries and statutory bodies were provided to MPs in Compact Discs. “These CDs are a waste of money. Years ago, these reports came in book format and kept on our tables.

Thereafter, a positive move was taken to replace books with CDs. As we know many MPs do not use them. They do not take those CDs with them. It could be seen that some of the CDs are now lying along the corridors here. That is not only a financial loss but an environmental hazard. Each MP has been given a laptop. These reports could be saved in those laptops. As per the past few days, CDs for more than 100 reports have been given to each MP. I propose that we should move on to a more modern system that would not cause environmental damage and save money.”

Environment Minister Mahinda Amaraweera: That proposal is a valuable suggestion. What the opposition MP said is true. Very few members make use of them. These are a problem for the environment. The MPs can access them through their laptops.

Speaker Mahinda Yapa Abeywardena: These reports are already in the laptops.

Minister Amaraweera: Therefore there is no need to distribute them in CDs.

SJB Colombo District MP S. M. Marikkar: We have to email these reports to another address and then take printouts. The problem is these laptops are fixed to the tables. We cannot take them away. If an MP is given a laptop the MPs should be able to take it away and use them. We cannot use this fixed laptop. Please make it possible for the MPs to use their laptops.

The Speaker: We’ll look into the matter and find a way to provide MPs with laptops.

1 Response to Speaker to give MPs laptops

Home » Speaker to give MPs laptops