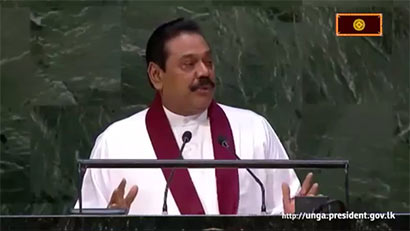 Post-conflict Sri Lanka has also become an unfortunate victim of ill-conceived agendas of some in the Human Rights Council, who pay scant regard to the substantial progress achieved by Sri Lanka, in reconstruction, rehabilitation and reconciliation within a short span of 5 years, President Mahinda Rajapaksa said addressing the 69th Session of the United Nations General Assembly.

He added that, there is an obvious lack of balance and proportion in the manner in which my country is being targeted today, disregarding these significant achievements.

This is in sharp contrast with the approach to deeply disturbing situations involving humanitarian emergencies elsewhere, President said.

I congratulate Your Excellency Sam Kutesa on being elected as the President of the 69th Session of the United Nations General Assembly. We wish you success and assure you of our fullest cooperation.

The theme for this Session, “Delivering on and implementing a Transformative Post-2015 Development Agenda”, is timely. The world has undergone many changes since the UN was created, and since the year 2000, much progress has been made towards achieving the Millennium Development Goals.

However, there are multiple challenges that still remain to be addressed. The moral and practical importance of creating an equitable world and a sustainable planet for this purpose cannot be ignored.

The Commonwealth, of which Sri Lanka is the current Chair in Office, accounts for over one quarter of the UN membership. In November 2013, the Commonwealth Heads of Government agreed in Colombo, to contribute to the process of evolving the new post-2015 global development agenda. They have endorsed the central focus on the eradication of extreme poverty and re-affirmed commitment to sustainable development.

Reducing inequality within and among countries is one of the most transformative goals that have been proposed by the Working Group on Sustainable Development Goals. We hope that this goal will serve to enhance the voice and representation of developing countries in decision making.

The post-2015 agenda must focus on implementation. Achieving the SDGs would be impossible without the political will and dedication of all countries. It must be ensured that the failure of the developed countries to fulfil Millennium Goal 8 that called for a global partnership for development is not repeated.

In determining goals, countries must not be deprived of policy space, to set their own domestic priorities. Instead of asking countries to re-prioritise domestic spending, there should be focus on a strengthened partnership between developed and developing countries, backed by sincere commitment. This is essential for countries in the South to access financial resources and technology that are essential for capacity building.

It is vital that we also address structural obstacles and political barriers that prevented the realisation of the MDGs, such as unfair trade and investment rules. Creating a supportive international economic environment, enhanced investment flows, including from multi-lateral development banks, and an open multi-lateral trading regime, are important.

We all know the historical context in which the United Nations was created after two world wars. During the seven decades of its existence, the world has been saved from plunging into another global war. The UN has helped to improve standards of living, eradicate disease, educate children, and in peacekeeping. Year after year in September, the world community comes together to reaffirm the founding vision of this institution.

The role of the UN in advancing international peace, security and prosperity is crucial in the contemporary world. However, in order to gain the confidence and goodwill of the international community as a whole, one of the essential requirements is consistency of standards across the board without any perception of selectivity or discrimination. It is in this context that the current functioning of the system needs fresh examination in order to enhance its credibility.

Human rights are used as a tool to implement motivated agendas with no understanding or appreciation of the complexity of issues in the countries concerned. Human rights should be recognised by all as a moral and ethical concept rather than as a political tool. External intervention without adequate consideration of the structures in a society and cultural traditions of the countries where such intervention takes place, inevitably results in destabilisation, which is very much in evidence today, in most parts of the world.

Post-conflict Sri Lanka has also become an unfortunate victim of ill-conceived agendas of some in the Human Rights Council, who pay scant regard to the substantial progress achieved by Sri Lanka, in reconstruction, rehabilitation and reconciliation within a short span of 5 years. There is an obvious lack of balance and proportion in the manner in which my country is being targeted today, disregarding these significant achievements. This is in sharp contrast with the approach to deeply disturbing situations involving humanitarian emergencies elsewhere.

For multilateralism to remain relevant and effective, reform of institutions concerned is essential. To be successful, this process must involve de-politicisation of the UN systems and mechanisms and they must stop being hostage to different forms of funding. UN bodies must find ways to work with governments through dialogue, greater understanding of situations and cooperation including assisting to strengthen national institutions. This approach, instead of strong arm tactics, must form the heart of multi-lateral diplomacy, in the search for sustainable solutions to global challenges.

The 70th year of the UN in 2015 also marks the 10th anniversary of the 2005 World Summit where global leaders agreed to support early reform of the Security Council. Concrete results in this regard should be achieved next year.

Climate Change is one of the defining challenges of our times. A robust global response needs to be arrived at in 2015, on the basis of equity and the principle of common, but differentiated responsibilities.

The escalation of violence in the Middle East is deeply distressing. I reiterate Sri Lanka’s support for the early realisation of a sovereign, independent, viable and united State of Palestine, existing within secure and recognised borders, side-by-side and at peace with Israel. We look forward to welcoming Palestine as a full member of the UN at the earliest.

Sri Lanka firmly believes in the need for solidarity between Asia and Africa. Admiring the efforts of the people of Africa to achieve socio-economic development, Sri Lanka has begun a process of reaching out to countries in Africa, to support capacity-building, and exchange knowledge and expertise in areas of importance. The international community must strongly support the early eradication of deadly diseases in Africa.

Terrorism continues to be a grave threat to security and stability of nations across the globe. Having suffered at the hands of terrorism, Sri Lanka knows well, its drastic impact on societies, communities and institutions founded on democratic traditions and ideals. The international community must strengthen multi-lateral action on terrorism including the early finalisation and adoption of the UN Comprehensive Convention on International Terrorism. Sri Lanka is also committed to support all multi-lateral efforts to counter, terrorism financing, piracy, and all forms of international organised crime.

Sri Lanka expresses deep concern regarding unilateral economic measures against developing countries and is a consistent supporter of the call of the UN General Assembly for an end to the unjust economic, commercial and financial embargo against Cuba. Unilateral sanctions of this nature which impact a country’s innocent population are unethical.

Despite being affected by terrorism Sri Lanka has achieved most MDGs. Sri Lanka has succeeded in being ranked ahead of all South Asian countries in the 2013 Human Development Index.

Through the adoption of the National Development Strategy, the Mahinda Chintana, ‘Vision for the Future’, the Government of Sri Lanka embarked on an inclusive and rural-centric development programme. This involved bold policy decisions connected with macro-economic management, revitalisation of agriculture, infrastructure development including road and expressways, ports and airport, irrigation and water distribution, a strong telecommunication network and well distributed urban and township development resulting in 7.8% GDP growth and per capita income of US Dollars 3,280 in 2013. It is a matter of deep satisfaction to recognise that the economic and political empowerment of the people of the North supported by massive investment in infrastructure and livelihoods have also contributed to this growth.

With the end of terrorism in May 2009, in keeping with my responsibilities to my people, large-scale post-conflict reconstruction, rehabilitation and resettlement initiatives were implemented in the Northern and Eastern Provinces, in a relatively short period of 4 years. Most importantly, democratic structures in the North have been re-established. Elections were held to the Northern Provincial Council in September 2013, after a lapse of 28 years.

I recall in this context, the visit of the UN Secretary-General, to Sri Lanka, just a week after the conclusion of the conflict when a new era of peace had dawned. This was a manifestation of the close cooperation between my country and the UN and our commitment to work together in the future.

We continue on a deeply satisfying and a transformative journey in the interest of all the people of Sri Lanka. In carrying out this task, we work in accordance with our traditional foreign policy of ‘friendship towards all and enmity towards none’. We hope that the international community will reciprocate and assist Sri Lanka in her domestic process of reconciliation and economic development without exerting undue pressure on us.

We have gained inspiration from the words of Gautama the Buddha who said that the purpose of all human endeavours must be to construct order out of chaos and harmony out of strife. True to these words of wisdom, the Government of Sri Lanka remains committed to its objective of pursuing the processes of reconciliation, and nation building, undeterred by ill-motivated criticism.

May the Triple Gem Bless you all.