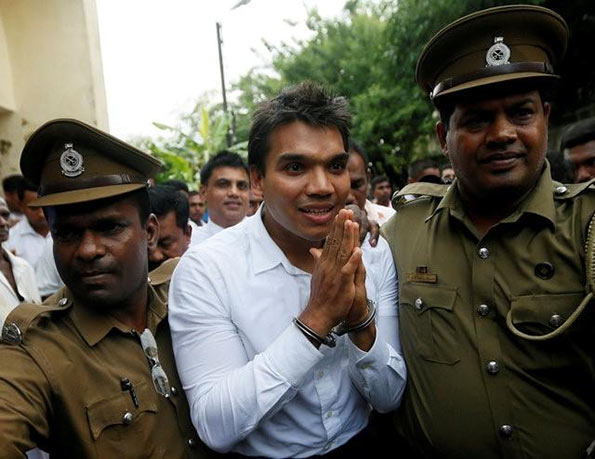 The son, Namal Rajapaksa, who is also a member of parliament, had been questioned by officers from the Financial Crimes Investigations Division investigating some money he had invested in two companies, the lawyer said.

“He was arrested by police under the anti-money laundering act,” lawyer Premanath C. Dolawatta told Reuters.

He later appeared in court and was remanded for a week, Dolawatta said.

Neither Namal Rajapaksa nor family members were immediately available for comment but they have in the past all publicly denied wrongdoing.

It was the second time he had been arrested.

In July, he was arrested in connection with a separate case on suspicion of misappropriating of funds in a $650-million apartment project and was released on bail after seven days in detention on remand.

He too has denied any wrongdoing.

Since he took power in January 2015 after winning a presidential election, President Sirisena has launched a series of investigations into deals cleared by his predecessor and several members of his family.

Mahinda Rajapaksa was president for a decade until January 2015 and is now an opposition legislator.

He is popular among ethnic majority Sinhala Buddhists who credit him with ending a 26-year-war against ethnic minority Tamil separatist rebels in 2009.

He is trying to rally opposition to the government.