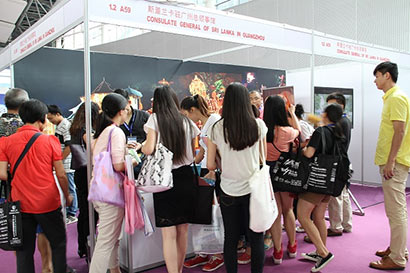 Sri Lanka won an award for Best Travel Destination of Cantonese, based on online voting by the readers of the Southern Metropolis Newspaper.

The award was presented to the Consulate General on the opening day of the China (Guangdong) International Tourism Industry Expo 2013 (CITE 2013), a one-stop platform for the travel trade, which took place at the China Import and Export Fair Pazhou Complex, Guangzhou from August 29th –September 1st 2013.

Guangdong Province, China’s largest province in terms of Gross Domestic Product, is a top outbound travel market in China. The organizers announced that the expo attracted exhibitors from 45 countries and more than 500,000 visitors including 20,000 professional buyers.

The Consulate General had a stall at the event, to promote Sri Lanka as a major tourism destination. Ceylon Tea was provided by Mlesna to members of the general public who flocked to the stall in large numbers. There was great interest in learning about places of interest, hotels and itineraries in Sri Lanka.