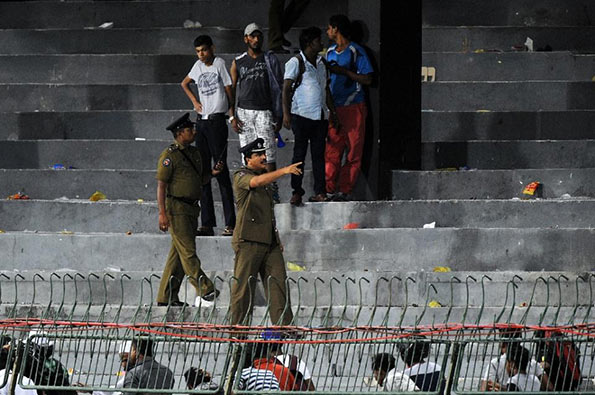 Sri Lanka’s cricket authorities announced a ban on alcohol during Wednesday’s fourth one-day international between Pakistan and the hosts following a drunken riot at the venue on Sunday.

Sri Lanka Cricket said unruly behaviour will be dealt with severely as a response to crowd unrest that held up play for 30 minutes at the Premadasa stadium, delaying Pakistan’s victory to lead the five-match series 2-1.

Items banned according to a cricket board statement include hooters, liquor, glass bottles, sharp objects, lighters and boxes of matches.

“Any unruly behaviour by any spectator will be severely dealt with and may even be subject to eviction from the grounds,” the statement added.

Police cleared two blocks of stands at the Premadasa stadium during a match played under lights after a drunken brawl led to pelting of stones into the outer field that threatened the safety of players.

No players were hurt on Sunday but Sri Lanka’s sporting image suffered a blow with the local media blaming the authorities for not taking action to prevent the unprecedented clashes.

A dozen vehicles were damaged and several bystanders were also hurt.

However, Pakistan players and supporters declined to blame Sri Lankan authorities and fans at large for the disturbance, instead pointing the finger at a small group of spectators.