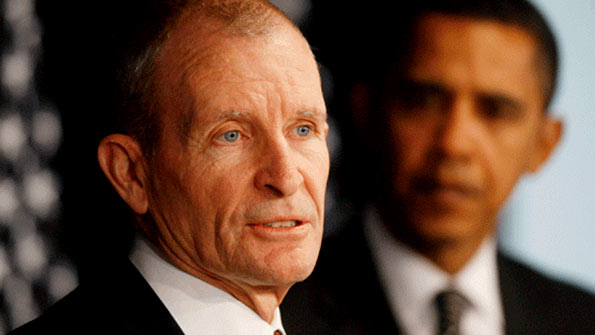 Election outcome in Sri Lanka is important for the region and the world, Dennis Cutler Blair, the former United States Director of National Intelligence and former US Navy admiral has said.

In a statement he said “Sri Lanka’s parliamentary election on August 17 will determine whether the reforms of President Maithripala Sirisena, himself elected to the surprise of most observers in January, will continue.

Election outcomes in both Sri Lanka and Myanmar are important for the region and the world. In a rapidly developing region, both are becoming key transportation hubs for South and Southeast Asia. Coming out of political isolation, both represent profitable investment opportunities; their annual GDP growth rates are over 6 percent. Probably most important, both have chosen democracy and open markets for their futures, at a time when authoritarianism and centralized economic systems are claiming superiority.

In Sri Lanka, the two contending sides contrast starkly. Mahinda Rajapaksa was president for 10 years. In 2009, his forces finally crushed the prolonged and vicious Tamil insurgency.

Domestic forces will determine the future of both Sri Lanka and Myanmar. Most important will be the results of the elections themselves, both of which appear on course to produce reliable results based on largely free and fair processes. The subsequent maneuvers and agreements of the leaders of the various factions will play the critical role in the shape and speed of the next phase of democratic reform in both countries.

Other countries will influence the near and long-term future of both Myanmar and Sri Lanka. China in recent years has piled into both with highly visible economic projects and military initiatives – submarines visiting Sri Lanka and arms sales and training missions in Myanmar. Economic largesse is generally welcome, but both countries have put major Chinese projects on hold, mistrusting Beijing’s influence and intentions, as well as China’s identification with the previous authoritarian regimes.

The United States has made it clear that further progress in bilateral relations depends on implementation of election resultsand the achievement of a national ceasefire with the ethnic minorities.

Attention to Sri Lanka has been less smothering. The United States cooled relations as Rajapaksa’s regime became more oppressive, welcomed Sirisena’s election, and Secretary of State John Kerry made a visit to Sri Lanka in May. Washington has made it clear that democratic progress must continue, and that there must be accountability for the killings at the end of the civil war for bilateral relations to improve.

Sri Lanka wants good relations, with more economic investment. As in the case of Myanmar, however, progress depends more on domestic factors and decisions than it does on outside pressure and incentives.

American policy towards these two countries – jawboning, sanctions manipulation, and the promise of better future relations – has been useful, but probably not decisive in the positive recent developments in either Sri Lanka or Myanmar.” — (Pakobserver)