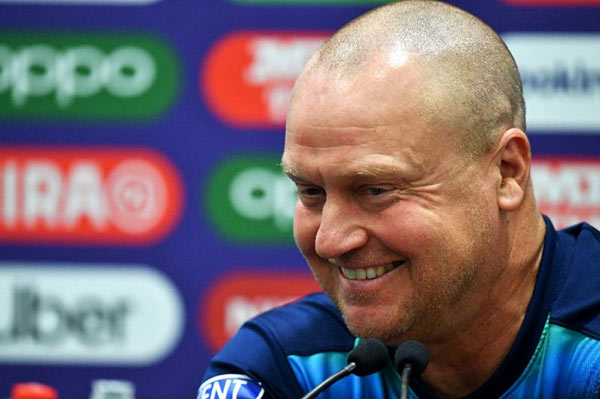 Sri Lanka batting coach Jon Lewis believes it is just a matter of time before Kusal Mendis and Angelo Mathews hit form at the World Cup.

Experienced all-rounder Mathews has yet to open his account after ducks against both New Zealand and Afghanistan while Mendis has scarcely been more productive with a nought in the defeat by the Black Caps followed by just two runs in a tense win over the Afghans.

Sri Lanka, whose last match against Pakistan was abandoned without a ball bowled, face Bangladesh in Bristol on Tuesday.

“We have some experienced players in the middle with Kusal Mendis and Angelo Mathews,” Lewis said on Monday.

“They obviously haven’t quite fired yet but Afghanistan let us get away with that. I’m confident players of that quality will definitely come to the party soon.

“With Angelo you have to have faith in a guy who has done as much as he has over a long period of time and he tells me he is in a good place and good headspace.”

“I have no reason to doubt that the runs will come from him,” added Lewis of the 32-year-old all-rounder, who has scored two one-day international hundreds and 37 fifties.

Mendis has just one ODI hundred from 65 matches, although it did come against Bangladesh in Dambulla two years ago.

This is in marked contrast to the 24-year-old’s Test record of six centuries in 38 matches.

Lewis, asked to explain the difference, said: “Mendis could do with a little bit of a confidence boost. I think for him it’s a case of just getting through those first 20 balls.

“In the build-up to the World Cup, he played well against Scotland and the two warm-up games he looked in good form even though he only got 20s and 30s, which was a downer.

“Those would have been a good opportunity to get a big score, but there was nothing about his form in either of those two games to suggest there’s anything to worry about.

“He’s had two low scores and of course it would be good if he had more runs behind him, but I think he’s probably only 20 balls from being really away.”

Lewis, former coach of English county side Durham, confirmed Sri Lanka would be without Nuwan Pradeep, who took four for 31 against Afghanistan, after the paceman suffered a finger injury during training on Sunday.

Suranga Lakmal is set to be brought in as a like-for-like replacement.