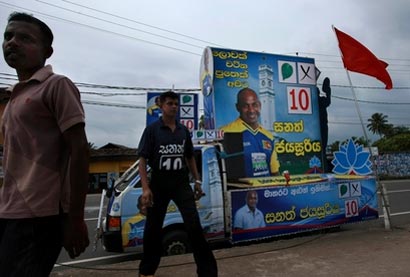 COLOMBO, Sri Lanka (Reuters) – Sri Lanka have called up uncapped wicketkeeper-batsman Dinesh Chandimal in their 15-man squad for next month’s Twenty20 World Cup. The highly-rated 20-year-old was included in the squad named by selectors on Wednesday after scoring 320 runs at an average of 53.33 in Sri Lanka’s domestic T20 league.

The squad also includes the vastly experience Sanath Jayasuriya, now aged 40, who is campaigning to become a member of parliament in Sri Lanka’s parliamentary elections.

Sri Lanka included three specialist spinners in their squad, including off spinner Suraj Randiv in addition to regulars Muttiah Muralitharan and Ajantha Mendis.

The tournament will be held in West Indies from April 30 to May 16.