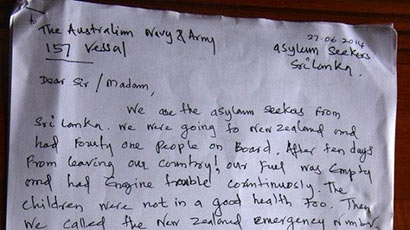 A Sri Lankan court on Monday ordered that five suspected ringleaders of a people-smuggling operation remain in custody for two more weeks, in a case that has fuelled controversy over Australia’s tough line on immigration.

The five were among 41 Sri Lankan asylum seekers sent home by Australia after their refugee boat was intercepted. Immigration Minister Scott Morrison has denied that the operation violated international conventions.

The men have not been charged but their detention was extended to July 28 by a magistrate in Galle, a port on Sri Lanka’s southwestern coast, pending a ruling on whether they can be charged.

A lawyer acting for two of the detainees questioned the jurisdiction of the Sri Lankan courts, as they had been arrested in international waters.

“We said they were remanded by the Australian border protection authority, and not by Sri Lankan police in international waters,” lawyer Lakshan Dias said. “So they should be charged in Australia or according to international law.”

The actions of Prime Minister Tony Abbott’s government have stirred controversy, with human rights groups arguing that the asylum seekers – some from Sri Lanka’s minority Tamil community – are fleeing persecution at home.

“Both my clients are not organisers, but passengers. They were under persecution in Sri Lanka. That’s why they left the country,” added Dias.

A second boat carrying 153 Sri Lankan asylum seekers remains in legal limbo as the Australian High Court considers whether its interception by border authorities was legal or not.