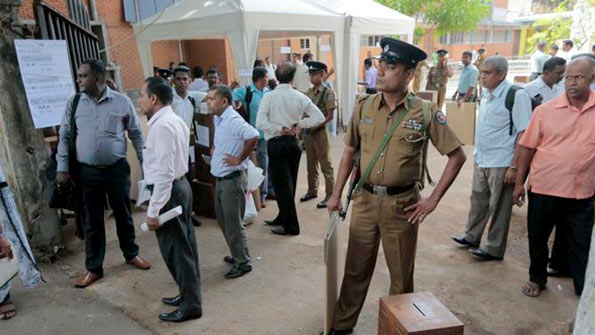 Sri Lanka deployed thousands of police today in stepped up security on the eve of a general election after the campaign was hit by sporadic violence that claimed four lives.

Police Inspector General NK Illangakoon said 63,000 officers were fanning out across the country to guard polling booths and counting centres for Monday’s election, while para-military commandos were on alert in case of trouble.

“We have taken additional measures to ensure that the election is conducted peacefully and there are no incidents in the post-election period too,” Illangakoon said in a statement.

Two party workers were killed and a dozen others wounded when unknown gunmen opened fire at a ruling United National Party (UNP) rally in the capital Colombo two weeks ago.

Illangakoon said several arrests have been made. Another two people were killed in two separate shooting incidents elsewhere during the month-long campaign.

Despite the deaths, private election monitors said there had been fewer incidents of violence compared to previous elections over the past two decades.

Former strongman Mahinda Rajapakse is seeking an unlikely comeback as prime minister at the election after his loss at the presidential poll in January to his one-time protege Maithripala Sirisena.

Many observers were stunned by Sirisena’s victory over Rajapakse, who had been in power for nearly a decade and oversaw the crushing of the Tamil Tiger separatist rebels in 2009.

Although Rajapakse is reviled by large sectors of the minority Tamil community, he retains widespread support among ethnic Sinhalese voters and his rallies have drawn big crowds.

Sirisena has vowed to veto any attempt by Rajapakse to become premier if their United People’s Freedom Alliance (UPFA) wins Monday’s poll.

Sirisena is the official leader of the UPFA and only reluctantly agreed to allow Rajapakse to stand for the party in the election.

Some 15 million people are eligible to vote when polls open at 7am (local time), and results are expected by late Tuesday.