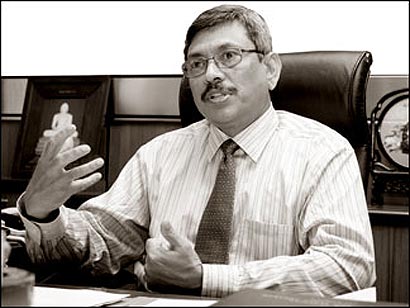 In an exclusive interview, with ‘The Asian Age’ Defence Secretary Gotabaya Rajapaksa says that Sri Lanka’s military victory over the LTTE offers lessons for the international community.

Following are excerpts of the interview on 15th September, 2010.

Q. Recently you visited India for defence talks. There was defence cooperation for years before and during the conflict, so what are both sides talking today?

A. India could not do certain things, meet certain needs of the Sri Lankan armed forces, like supply of weapons, because of the sensitivities during the conflict period. Now that issue is no longer there, so we can think of going beyond that. The whole idea is to improve the defence relationship, to strengthen regional security, to improve maritime security in the Indian Ocean.

Q. There are concerns in India about China looking to beef up its presence in Sri Lanka, particularly its role in the Hambantota port project.

A. It is purely a business arrangement, nothing beyond that. I don’t think there is any issue in that sense. Wherever possible, when India has faced any security concerns, we have always bent backwards to accommodate them. With India, we are not looking at government-to-government relations alone; we are interested in people-to-people ties and trade. I know that Indian investors are interested in infrastructure projects in Sri Lanka. We are studying India’s successful PPP (public-private partnership) model.

Q. There has been criticism of the delay in the rehabilitation of the displaced Tamils.

A. I don’t think any other place in the world has so quickly resettled these people in their original habitats in such a short period. In one year we have resettled a majority of the three lakh IDPs. Very few are remaining, and that is because of the delay in clearing landmines. We cannot solve problems overnight but the government has aggressively invested more money in the North and East than the other provinces.

Q. Sri Lanka has also been criticized for not minimizing the civilian casualties of the war.

A. India knows what is LTTE but most of the outside world does not. It was a most ruthless terrorist organisation. Some think the attack on the USS Cole was the first attack by a terrorist group but by that time the LTTE had done many attacks on ships. It had done more suicide attacks in one year in Sri Lanka than all the suicide attacks in Afghanistan and Iraq put together. The LTTE’s weaponry was equivalent to that of the armed forces – heavy artillery guns, mortars, machine guns, missiles, Naval suicide boats and, ultimately, even small aircraft. That was the magnitude of its military strength. So it was not a small insurrection or a civil disturbance. By defeating the LTTE, we have stopped the killings of innocent civilians.

Q. How are you dealing with the former LTTE combatants?

A. We have rehabilitated about 500 child soldiers. We started a skill development programme for the 11,000 former combatants who surrendered; some of whom have completed this programme and joined the society. This is the truth but the other side does not know the true story.

Q. What can the world learn from Sri Lanka’s experience with terrorism?

A. What we have done is to defeat the terrorists. I should say any country which faces terrorism should follow the Sri Lankan model. I think in fighting terrorism as well as humanitarian assistance in a conflict like this, there are lots of lessons for others to learn rather than criticise. But there were concerns about humanitarian assistance during the conflict. Our military operations and humanitarian assistance ran parallely. One can say the actions were not effective, maybe there were weaknesses, but it was a success. Of course, there were issues but in a situation there would be issues. We had no-fire-zones and restrictions on use of heavy weapons which are not normally done anywhere in the world in this type of situation, but we did that.

Q. Looking back at the last days of the conflict, would you have done anything differently? There were reports that some LTTE leaders wanted to surrender but they were shot, there was also talk of ceasefire.

A. Prabhakaran did not want to surrender. Even the night before they were defeated, they tried to launch a counter attack and escape. There would have been no problem if they had surrendered, but we came to that last minute after a hard battle and a lot of sacrifices, so we were not ready for ceasefire.

Q. And did they inform the UN?

A. Nobody informed us about any surrender. We took the time to defeat the LTTE because of the civilians. If we had no such concerns, we could have bombarded the place, used all our artillery and walked through within a day but we took over two months. So the international community must consider the risks that we took.

Q. Looking ahead, do you have a political solution of the ethnic problem, a devolution package?

A. Political jargons alone will not bring about a solution. We have created an environment for everybody to live peacefully, as Sri Lankans, as one nation. All other issues are for politicians. The ground reality is we must give people the opportunity to live peacefully, with jobs and education. That is what they want and the government will ensure that is there in Sri Lanka.

Q. What will be your message to the Lankan-Tamils living in India and abroad?

A. Some of them left long ago; others, more recently. The second and third generations have concerns about their children’s education. I know it is difficult to give all that up and come. But if they come, they are most welcome. I think they must bring their know-how, knowledge, and invest their wealth here because development is the main requirement.

8 Responses to Sri Lanka established a Model to defeat Terrorism