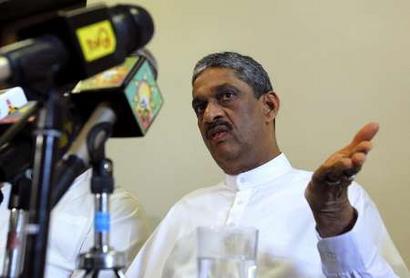 COLOMBO (AFP) – Sri Lanka’s ex-army chief on Thursday vowed to “expose” any war crimes committed at the end of the country’s civil war, raising pressure on the government, which has resisted calls for a probe.

The United Nations estimated that 7,000 civilians perished in fighting in the early months of last year when government troops overwhelmed Tamil Tiger rebels and ended their 37-year separatist campaign.

General Sarath Fonseka, who fell out with President Mahinda Rajapakse and quit after successfully crushing the Tamil rebels, said there were allegations that should be thoroughly and independently investigated.

“I will go out of my way to expose anyone who has committed war crimes,” Fonseka told reporters. “I will not protect anyone, from the very top to the bottom.”

Fonseka, who was taken into military custody in February, spoke with reporters inside parliament after being escorted to attend Thursday’s session as an opposition MP. He won a seat at April parliamentary polls.

Fonseka said the government was afraid that he would expose anyone found guilty of rights abuses and was “hell bent” on silencing him.

“It is not patriotic to protect anyone who has caused injustices to Tamil youth,” Fonseka said, adding that he himself was not personally aware of any instances of abuses but wanted all charges investigated.

Even as he spoke, the president announced plans to review the final phase of the battle against Tamil Tiger rebels, but stopped short of calling it a war crimes probe.

The president in a statement said he would appoint a commission to assess the lessons from the last stages of fighting and recommend measures to prevent a return to conflict.

“In assessing the lessons learnt from the recent conflict phase there will be the search for any violations of internationally accepted norms of conduct in such conflict situations, and the circumstances that may have led to such actions, and identify any persons or groups responsible for such acts.”

It did not specifically refer to rights abuses and allegations that surrendering rebels were killed while thousands perished in the crossfire or were deliberately targeted.

Fonseka has accused the president’s brother, defence secretary Gotabhaya, of ordering the execution of surrendering rebels, a charge he has vehemently rejected.

In an interview published Thursday, Gotabhaya said Fonseka was planning to use his parliamentary position to “fast track” and force an international war crimes investigation against Sri Lanka.

“Any Sri Lankan promoting an agenda which is detrimental to the country is nothing but a traitor…,” said Gotabhaya.

“Traitors deserve capital punishment and no one should shed crocodile tears for them,” he told the privately-run Island newspaper.

“Those bent on destabilising the country would now exploit Fonseka’s parliamentary privileges to fast track their sinister campaign (for a war crimes probe).”

Fonseka was arrested shortly after contesting presidential elections in January and faces court martial proceedings for allegedly dabbling in politics before he quit as army chief in November.

“There were a lot of things said at the time (of the final offensive),” Fonseka said.

“If there is any international investigation, I will fully support that.”

Sri Lanka has strongly resisted calls for an international probe, saying no civilians were harmed by government forces in its battle against the Liberation Tigers of Tamil Eelam (LTTE).

Sri Lanka insists it carried out a “humanitarian operation” to free Tamil civilians from rebel control, but the UN and Western nations, including the United States and EU member states, have insisted on accountability.