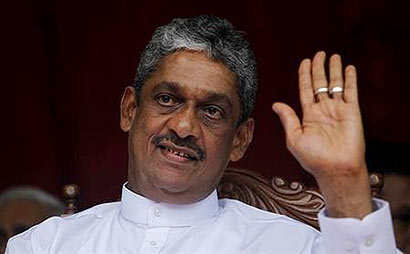 (Reuters) – Sri Lanka’s former army chief, who led the military to victory at the end of a three-decade conflict against Tamil Tiger rebels, has said he is ready to face questions about allegations of war crimes.

Sri Lanka is under Western and U.N. pressure to conduct an independent investigation into conduct during the war where, rights groups say, the former army chief and others are implicated in shooting fighters as they sought to surrender.

Sarath Fonseka told reporters he was ready to answer questions on his record in a war in whose final months, in 2009, tens of thousands of civilians were killed, according to a U.N. panel.

“If somebody is shy and tries to hide from facing questions, then obviously, people will start suspecting more and more,” Fonseka told a Foreign Correspondents’ Association forum late on Tuesday.

Fonseka said the military under his command fought the war professionally according to international law and he was confident they had not violated human rights. If there was “specific evidence” which merited an inquiry, he said: “If anybody questions me I will answer. I’m ready to answer.”

The U.N. Human Rights Council has called on Sri Lanka to investigate human rights violations during and after the war. The government says it has been implementing the recommendations via a local commission as requested by the United Nations.

Since the war ended, Fonseka has fallen out with the government and served jail time for crimes including corruption and engaging in politics while in uniform.

Fonseka ran for president in 2010 but lost to Mahinda Rajapaksa who has ruled the island state since 2005. Rights groups also say Rajapaksa has not addressed the war crimes allegations, something he denies.

Still popular among many Sri Lankans, Fonseka is seen as a potential political threat to Rajapaksa, despite the fact that his jail record means he cannot run for election for the next seven years. (Reuters)