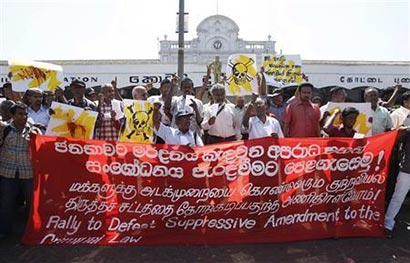 (Reuters) – Sri Lanka approved legislation on Tuesday allowing police to hold suspects for up to 48 hours without a warrant amid street protests accusing the government of acting to suppress dissent.

Rights groups assert that Sri Lanka, which has a long history of police impunity, of continuing to violate human rights despite the end of a three-decade-long war with Tamil Tiger separatists in May 2009.

Police in the South Asian nation previously could detain suspects without charge for 24 hours.

“This is to curb organized crime,” Environment Minister Anura Priyadharshana Yapa told parliament in presenting the bill. “If there is a need to extend the detention by another 24 hours, it could be done by a magistrate based on a certificate produced by the police.”

Hundreds of opposition supporters protested against the bill in the heart of the capital Colombo, calling it a violation of human rights. said it was another maneuver to throttle dissent.

“The government should have relaxed anti-democratic laws enacted during the war. But instead they are trying to suppress the people further. This allows more room for police torture,” opposition lawmaker Vijitha Herath told Reuters.

The United Nations and Western countries including the United States and Canada have urged President Mahinda Rajapaksa’s government to address rights abuses committed during the final stages of the war in which it defeated Tamil rebels.

The U.N. refugee agency UNHCR in March urged Colombo to implement recommendations of its own official domestic investigation calling for the prosecution of soldiers suspected of misconduct as the war wound down.

The U.S. Embassy in Colombo said it was disturbed by a series of threats and attacks targeting legal defenders, civil society organizations and activists who spoke out on a recent impeachment of Sri Lanka’s chief justice.

Rajapaksa appointed a close ally as chief justice last week after he sacked the top judge following the impeachment despite opposition from the Supreme Court.